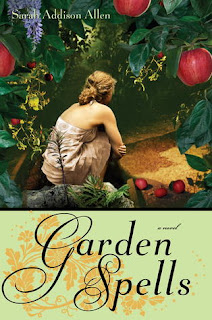 The Waverley family is known for the magical properties of the plants they grow, especially the closely-guarded apple tree. The property is now occupied only by Claire Waverly, a young woman who runs a catering business and has no interest in relationships. When her sister Sydney arrives after being gone for ten years, young daughter Bay in tow, Claire knows her life is about to change. But she also fears that her sister will inevitably leave again. Meanwhile, her new neighbor is obviously interested in her and although she keeps trying to avoid him, Sydney only makes things worse by befriending him and encouraging him in Claire's direction.

Sydney won't tell Claire much about where she's been since she last left their hometown of Bascom, North Carolina. The truth is that she moved around a lot, but for the past several years was in an abusive relationship and had to plan extremely carefully to get away. It was seriously terrifying to read about. Luckily she had been living under a different name and was able to adopt her true identity again when she came back home, but she knows Bay's father will do everything he can to hunt her down. She had always wanted to get away from Bascom, but now she knows it's where she really belongs. And so does Bay - like the other Waverley women, Bay has a sort of special power. Hers is that she knows where things, and people, belong.

Claire feels abandoned, tied to her home while everyone else leaves. Her mother, her sister, probably her neighbor Tyler Hughes, which is why she doesn't want to get involved with him. Her focus has always been on her business, which is where she uses her special power. She gardens, and then uses the plants in her cooking, tailoring the recipes to what people need based on the magical properties associated with different ingredients. The center of the garden is the old apple tree, which is the reason there's a tall fence around the property - kids are always trying to sneak in for one of the apples because they've heard they are magical. They are, but Claire wants to protect people from the magic. If someone eats one of the apples, they have a vision about the biggest event of their life, which can really screw up the rest of it, depending on what they see. The tree sometimes throws apples to the ground deliberately, wanting people to eat them. Claire gathers them all up and buries them.

I've seen this book around for years and I've always really liked the cover, but didn't think it was my kind of book. Recently a book blogger I follow read it and loved it so I thought I may as well try it. In a way I think I was right and it's not exactly my kind of book, but I did enjoy reading it for the most part. Magical realism is hit-or-miss with me, but here those parts worked well. The folkloric aspect of magical plants is appealing, and I liked the story of the sisters, one sowing her wild oats around the country while the other stayed at home quietly tending her garden and keeping to herself. Certain aspects felt dated to me, but I can't put my finger on them - something about the way the romantic relationships worked. It only bothered me because I couldn't quite identify what felt so old-school about them.

For some reason I feel like I would have loved this book had I read it as a teenager or in my twenties, but of course it hadn't been published then. Maybe it just reminds me of other books I read at that time. But I did like it. Once I started, I got pretty invested in the characters and their relationships, including the one between Claire and Sydney. They had never been close and I just wanted them to finally be good sisters to each other. I also really liked their elderly distant cousin, Evanelle, whose power was to give things to people just before they would need them. She didn't know why she kept collecting things or why she had to give a particular object to someone at a particular time, but it always turned out to be something they needed. The ending was a bit abrupt for me, a scary thing happening that (intentionally, temporarily) wrecked the safe, magical atmosphere of the whole story, but it was something I had more or less expected. All in all I'm glad I finally read it and I do still love the cover. I also love the cover of Allen's book First Frost, which turns out to be a sequel to this one. Maybe I'll read that too.
Posted by 3goodrats at 5:44 PM

This is one of my mom's favorite books! I think I read it on her recommendation years ago, before Goodreads so I can't remember.