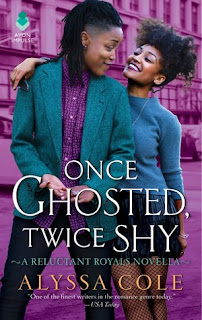 Back in A Princess in Theory, Prince Thabiso had an assistant named Lakotsi who I liked a LOT and now she has her own story. It's just a 120-page novella but I'll take it. During the events of A Princess in Theory, Lakotsi spent a weekend with a woman named Fabiola while in the US, knowing that it was just a fling because she'd be returning to her home of Thesolo. But during that short time she fell for Fabiola, and was hurt on the last night they were supposed to get together when Fab sent her a text just cutting her off. Now, back in New York again, she runs into Fab by chance on the train.

The story shifts back and forth from their first weekend together to the present day, and we get both Lakotsi and Fab's perspective. We know that the reason Fabiola cut contact with Lakotsi had to do with a family situation that arose suddenly, but that story comes out slowly over the course of the novella. In the present day, Fab convinces Lakotsi to go to brunch with her, and then do a couple of other fun things, all the while evading answering the obvious question of why she ended things so abruptly. Lakotsi still wants answers but she goes along with the activities, warning up to Fab again as she remembers why she fell so hard for her in the first place.

Lakotsi is very dapper and suave, always impeccably dressed, and her practice has always been to hook up with women in her free time, wherever in the world she happens to be. She's very dedicated to her work and considers her long-standing job as Prince Thabiso's assistant to be a lifetime career. She's really good at anticipating the needs of others, which she needs for her job, but which also serves her personally. I love her and was so glad she got a book of her own. Initially I was disappointed that it's just a novella, but the length was right for this particular story.

Fabiola is a jewelry designer trying to build her craft into a career, but now she has the added pressures of her current family situation to contend with. I won't spoil it, but will just say that she has become responsible for caring for a family member, which is a huge change for this young single woman. Her artistic and spontaneous personality comes through in this novel, as she leads Lakotsi around the city doing different interesting and fun activities, but she's clearly not flighty or irresponsible as one may be led to believe based on the last time she and Lakotsi were together.

This was short enough that I didn't get as invested as I would had it been a full-length novel where you can really get to know the characters and their histories more and have a slow build-up of the relationship. But for what it is, I thought it worked well - it was fun, had an interesting story that I wanted to know more about, and I really wanted things to work out for Lakotsi and Fabiola because they're both great people who deserve love. It's a romance novel, so of course it had a happy ending. All in all, it was a win! I'm actually behind on this series, having read only A Princess in Theory and this one, and I think there are two more full length novels now and another novella. This was a great reminder to get back to this series!
Posted by 3goodrats at 9:50 AM