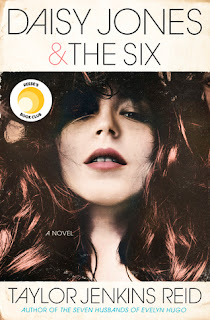 Daisy Jones & The Six were a hugely popular rock band in the 70s until they broke up at the height of their career. Daisy Jones was a striking young woman really into the party scene, and who also had a fantastic voice and a flair for songwriting. The Six were a band fronted by Billy Dunne, also a talented singer and songwriter. Their first tour began just after Billy found out his girlfriend was pregnant and they got married. He went totally wild on tour. After the tour when he was getting himself cleaned up and trying to strengthen his marriage, the band was looking for what to do next. The answer was teaming up with new performer Daisy Jones, in a combination that was going to result in a phenomenal new album.

This book, the latest from one of my new favorites, Taylor Jenkins Reid, is unusual in that it's told in interview style. There aren't descriptions or anything like that, just the story told years later by the people who were there. It's kind of like reading the transcript of a documentary. A lot of people really love this style and think it worked fantastically well; I'm not actually a huge fan of it. It worked, but just wasn't really my style.

It's a good story though. A behind-the-scenes look at the rise and fall of a 70s supergroup is pretty compelling, especially when it's populated by such a volatile combination of characters. Billy Dunne gets into booze and drugs early on, and goes to rehab. It's after this that they team up with Daisy Jones, a big drug user herself. Much of the band's problems are from Billy and Daisy's relationship, which is kind of doomed from the start since it's not healthy for Billy to be around her so much. His relationship with his wife and kids is also a big part of this book and made me like him a lot. Camila was a total rock, and hearing her talk about her love for Billy and her loyalty to him, juxtaposed with the way he talked about the importance of his family was pretty great. There was also a secret relationship between two of the band members, and some jealousy and hard feelings from those in the band who felt like their voices were never heard. There was a lot going on with these people and it was fascinating to watch.

The 70s aren't a decade I like to immerse myself in and I don't like much of the music. Oh, that was another thing about this book - so much of it was about the music but I have no idea what it's supposed to sound like! Anyway, it's not my ideal time period or storytelling style, so consequently it's not one of my favorites of Reid's books, but it's still pretty solid. I read it in just a couple of days because, despite its drawbacks for me, it's still a pretty compelling story. If you're more into the narrative style and time period than I am, you might love it as much as everyone else seems to.
Posted by 3goodrats at 9:34 AM