The Way Home: Tales from a life without technology by Mark Boyle (2019) 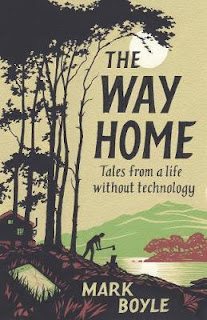 It feels strange to be writing a blog post about a book that is all about stepping away from technology and getting in touch with the actual world, but it's one I want to recommend and if I had to tell everyone in person, it just wouldn't happen.

Mark Boyle moved to a smallholding in Ireland to make a life for himself in a way that was not damaging to the earth or to himself. Rather than working for someone else all day to earn money to buy things for himself, he spends his days working for himself. Gardening, foraging, hunting, chopping firewood, whittling, doing laundry by hand, making everything he needs himself. He's not alone - his girlfriend Kristy lives with him in his cabin and there's also a farmhouse on the property. They have a free hostel where people can come and stay to experience the same sort of life.

The book isn't a straight-up memoir; there are vignettes about the way he lives interspersed with his thoughts about technology, nature, and people. A third element, set apart by italics, is the story of Great Blasket Island, inhabited by people living the old ways until it was evacuated in 1953. He spends a lot of time thinking about how he lives and how he used to live, how everything he does affects the natural world, and how technology affects us. It's very thoughtful and introspective. When I began reading and realized there wasn't really a story, just fragments of story mixed in with thoughts, I thought I might not like it. But it turns out that his thoughts are so compelling and well-expressed, and his life so interesting, that I had no trouble at all. The bits about Great Blasket Island didn't hold my interest quite as well, but even that was fairly interesting.

Doing everything the hard way means that Boyle has thought a lot about the easy way and its cost. There's also a cost for him to do things slowly and painstakingly, but one of the results is that you make time for the things that are really important and don't bother with the rest, a lesson we could all probably stand to take to heart. When he was using social media he was, of course, in touch with people he never saw otherwise, but in his new life he relied on the mail. At first, his mailbox was stuffed and keeping up with it was overwhelming, but over time it dwindled, which was a relief. He says "Inconvenience is a great filter." In terms of producing food and making things that he needs, it also filters out those things which are unnecessary but which we wouldn't think twice about acquiring when it's easy or cheap. But those things have a large cost to the environment and to the people getting paid pennies to produce them.

Sometimes it can sound like he's pining for the "good old days" but he has very good points about where our attention is these days, the number of distractions, and how removed from the natural world we are. This would be a good place to mention the value of some of our modern developments like antibiotics, but we have misused and overused them irresponsibly and I'm allergic to most of them anyway so they don't do me any good. In Boyle's case, he says he hasn't been to a doctor in ten years which I think he's trying to attribute to his healthy lifestyle and I'm sure that helps, but not having health issues is also a privilege that allows him to take on this strenuous self-reliant lifestyle. He also complains a lot about government regulations, some of which I'm sure are ridiculous, but at other times he comes across a bit like he's criticizing something just because he doesn't understand it. This isn't a complaint about the book, just a way of pointing out that although I feel pretty convinced that he's on the right track, he's imperfect like the rest of us.

Surprisingly, my favorite thing about his life is that he doesn't have any clocks and never knows what time it is. I'm a total clock-watcher because, like everyone else in our society, my life is ruled by having to be at work at a certain time which means having to get up a certain time, which means needing to be in bed at a certain time. It's a kind of prison and I have often wondered what my days would be like if I could just go to sleep and get up and eat when I feel like it rather than when my clock dictates. I was so jealous of this part of his life, but I'll probably have to wait until retirement to experience it for myself.

Look, I could probably talk about this book and its related ideas all day. I haven't even touched on the meditative aspects of picking nettles, the way advertising invades our privacy by constantly forcing its way into our heads, or many of the valid criticisms he has about capitalism. There's just too much here. I've always been a little obsessed with old-timey ways of life and people who live off the land, so this is very much up my alley. He's got a nice bibliography at the end of the book and although I'm unlikely to pick up a copy of Deerskins into Buckskins: How to Tan with Natural Materials,  I'd probably be interested in Helen and Scott Nearing's Living the Good Life: How to Live Sanely and Simply in a Troubled World, especially since I've already read their memoir The Good Life: Helen and Scott Nearing's Sixty Years of Self-Sufficient Living and found it quite inspiring. I'm unlikely to go live in the woods and start making my own soap and whittling my own spoons, but I do hope to be more thoughtful about the way I live my life.
Posted by 3goodrats at 11:26 AM