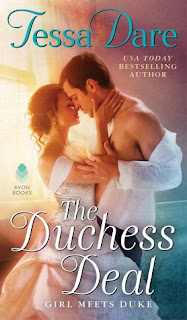 I read a book by Tessa Dare several years ago and wasn't impressed. Or rather, I liked it until near the end when everything went kind of stupid. I've shied away from her books since then even though I know a lot of people love them. But recently I heard such good things about The Wallflower Wager that I thought it would be worth trying this series and I wanted to start from the beginning.

Our story begins with Emma Gladstone paying a call to the Duke of Ashbury. She's a seamstress, appearing in a dress commissioned by the Duke's now-ex-fiance. Emma is desperate for payment, though I don't understand why she couldn't simply carry the dress with her. At any rate, the Duke makes her a counter-offer: marriage.

The Duke returned from war with hideous scars covering one side of his face and body, which is the reason his fiance changed her mind about marriage. It was a huge blow to his self-esteem and he's a bitter, brooding man. But he still needs an heir so he offers Emma a way out of poverty. The deal is that as soon as she gets pregnant, he'll give her a house in the country and she'll never have to see him again. This has an appeal to Emma because, in addition to wanting financial security, she has just learned that one of her unmarried friends is pregnant and needs a place to go during the final months of her pregnancy.

Emma is fairly attracted to the Duke early on, and all the sex they're having to try and produce an heir only increases that attraction. The Duke, though he tries very hard to retain his cynical outer shell, also begins falling for Emma. But he's not convinced he's worth loving, and his former fiance isn't entirely out of the picture, plus Emma's plans to hide away her pregnant friend begin to complicate things. It was a pretty good story that I was invested in from the start. I love a marriage of convenience, and a hero or heroine who has a physical or mental disability (not that his scars disable him, exactly.) Additionally, the Duke's staff really wanted him to fall in love with Emma and they would contrive situations to throw them together and it was kind of hilarious and cute.

There was a lot of humor actually, which seems to be the case with most romances I end up reading - are they all that way? Emma doesn't know what to call her new husband, refusing to call him the Duke, or Ash, or his real first name, George, because it's her father's name. So she resorts to making up silly little nicknames which he hates, but she is fond of torturing him in this way. I liked some of their wry observations about society too. For instance, when Emma insists on using her seamstress skills to make her own clothing, the Duke will not hear of it. She tries to reason with him, saying that ladies are supposed to do needlework. His response is "Fine ladies make useless things, like wretched pillows, and samplers no one wants, and disturbing covers for the commode. They don't use their skills to perform common labor."

Which brings me to one of the things I liked most about this hero. He was very conscientious about how his decisions affected others. So when he shows Emma her house in the country and tells her to hire people to fix it up and she insists it's perfect the way it is, he tells her how that doesn't matter because the important thing is giving work to people who need jobs. That is something she understands.

What he did that I didn't like was threaten Emma's father on her behalf and without her consent. When the Duke learned why Emma was so poor, that her father had thrown her out of the house and let her make her own way (starving and freezing and even losing a toe) he was outraged. He snuck away, found her father's house, and slipped into the guy's bedroom in the middle of the night to threatened that he'd go to hell. I appreciate the gesture, but I hate when men act like their female partners are helpless and need protecting and don't even ask before seeking out those who have wronged them. Maybe she wants you to stay the hell out of it.

I liked Emma too. She was clever and resourceful and didn't take shit from anyone. She was down-to-earth and forgiving and could see the good in people even when it was hard for others to. I also like the women she befriends, who are all unconventional and interesting, and who I think are the subjects of the other books in this series, which I now want to continue reading.

This was a fun story about an unlikely match and I was happy that I liked it a lot more than the last book by Tessa Dare that I read. I was really in the mood for something light and escapist, and this really fit the bill.
Posted by 3goodrats at 5:08 PM