The Mother of All Questions

The Mother of All Questions by Rebecca Solnit (2017) 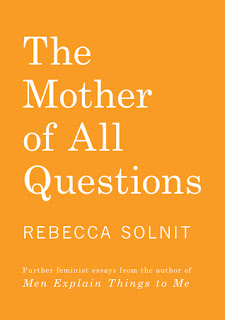 I impulsively borrowed this from a friend when I was at his house, despite having plenty to read and only moments before refusing his offer to borrow "anything I'd like" when he saw me browsing his shelves. But Rebecca Solnit is so smart and I so enjoyed Men Explain Things To Me that I couldn't pass up this book.

It actually took me a while to get through the first essay, "A Short History of Silence," which at 50-something pages is a pretty substantial chunk of the book. It was also probably the most abstract, and abstract is not something I am good at. It was about the many ways in which people (and more specifically, women) are silenced and even though it was a bit long and may be too broad and all-emcompassing for me, there were still passages I noted. One example is when she talks about how films primarily featuring men are just films, while those with primarily female characters are considered girls' or womens' films. She says "Men are not expected to engage in the empathic extension of identifying with a different gender, just as white people are not asked, the way people of color are, to identify with other races. Being dominant means seeing yourself and not seeing others; privilege often limits or obstructs imagination."

After this lengthy essay, which took me a few days to read, I read the rest of the book in probably a 24-hour period. As expected, having read Solnit's essays before, I was worked up into a rage, but also couldn't help smile at how clever, erudite, and articulate she is. I'm not great at expressing my thoughts and it's so satisfying to read the words of someone who can pinpoint exactly what it is about something that is so unjust or infuriating.

These essays examine events like the O.J. Simpson murders, Gamergate, and sexual harassment by men from Bill Cosby to Jian Ghomeshi. She talks about how women who have already been treated poorly by men are further harassed, often receiving rape and death threats online. She says "...the plethora of men attacking women and anyone who stands up for women in order to prove that women are not under attack and feminism has no basis in reality are apparently unaware that they're handily proving the opposite."  She always provides interesting statistics, such as that 38% of women murdered are killed by their partners, a sad but unsurprising fact.

In "Men Explain Lolita To Me," Solnit discusses the Esquire article "80 Books Every Man Should Read" (79 of which were written by men) and posits the merits of learning about others through reading, an idea that seems to upset some men. She says "Many among that curious gender are easy to upset, and when they are upset they don't know it. They just think you're wrong and sometimes also evil." (In that same essay she discusses the way that magazines like Esquire and Cosmopolitan feel the need to constantly instruct how to be your gender. "Maybe it says a lot about the fragility of gender that instructions on being the two main ones have been issued monthly for so long.") She points out the way that white men are forever talking about other people who can't take a joke or need to be coddled, when in fact they are the ones who react to jokes about themselves with rage and threats, and respond to criticisms about, say, male video game culture by threatening rape, death, doxxing, and bombs to the women who dare voice this criticism.

Rebecca Solnit gets at so many ideas in surprisingly few pages, and puts voice to things that are dancing on the periphery of my vision that I can't quite express. She's a lot smarter than I am, and I'm grateful that she shares her brilliance with the world. I was interested to learn from one of her essays that she has written a book about the history of walking, called Wanderlust, which I'd like to think I will read someday.
Posted by 3goodrats at 11:50 AM