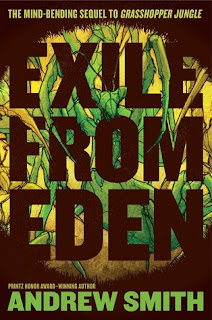 Sixteen years after the events of Grasshopper Jungle, Austin and Shann's son Arek is a teenager and starting to grow attracted to Mel, Robby's younger sister who is close to Arek's age. Austin and Robby often leave the hole together to explore and bring stuff back, but one time they leave and don't come back. Arek can't stand just waiting and decides to go looking for them.

The main story arc is about Arek and Mel leaving the hole to look for Arek's fathers, but discovering what the outside world is really like. They had been told that it was scary and dangerous, and while there were certainly scary and dangerous things out there it was so much more than that. It opened up their world in life-changing ways and neither of them will be able to go back to living in the hole all the time.

Arek's and Mel's story is told in alternating chapters with that of two other characters, Breakfast and Olive. Arek had heard of them because his fathers, during their explorations, had found notes that Breakfast left behind. Breakfast was constantly picking his nose, scratching his balls, farting, and declaring how wild he is, often punctuating his speech with "Ha! Wild!" Olive didn't speak at all but constantly jumped up and down in excitement. That was basically their shtick and it got old really, really fast. I quickly came to dislike reading the chapters about these characters.

The last book ended in a weird spot relationship-wise, and the love triangle between Austin, Robby, and Shann was left unresolved. It was basically the only thing I didn't like about that book. Now sixteen years later, Austin and Robby are a couple though it seems like they hide it from the other adults in the hole. Shann is unhappy and bitter, her mother Wendy a religious nut. But the story is unconcerned with the unhappiness of the women and nothing comes of that. Smith apparently only cares about boys and how all boys want to leave, which he keeps saying, as though nobody female ever got sick of their life and wanted to start fresh. I guess he thinks women are fine with being stuck in a hole and miserable like Shann.

It never explained why Robby and Austin were gone for so long, and I don't understand the title of the book either - doesn't exile mean you are sent away? It is sort of implied that the women made everyone miserable and the guys (and Mel) needed to leave the hole to get away from them. We also never learned how Breakfast and Olive met up. Throughout a lot of the book Breakfast is telling Olive the story of his life before he met her, but he never reaches the part where they met and, knowing what I now know about Olive, I'd like to know how they came to be traveling together.

It was ok enough, not nearly as good as Grasshopper Jungle and as I've mentioned I had a number of specific disappointments. I did like reading about Arek and Mel and their adventures discovering the outside world for the first time. During the course of the story, the Unstoppable Soldiers (the giant praying mantises) that they encountered seemed to be sick or dying, so there is hope that humans may be able to come out of hiding and reclaim the world. I'd like to think Arek and the others would bother to let the rest of the family know it's safe to come out of the hole at that point, but I'm not convinced they would.
Posted by 3goodrats at 8:27 PM