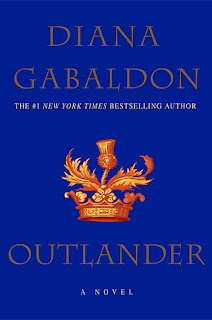 I won this book in a mini-challenge which was part of this year's TBR Pile Challenge. I had my choice of books and picked Outlander because I'm so intrigued by the show but had an idea that I might like the book so I wanted to try it first before watching.

Although I've known about this series for years, I had no idea it involved time travel at all. If you don't know the premise, it begins in 1945 when Claire and her husband, newly married before the war, travel to Scotland for a very belated honeymoon. While there, Claire walks through a mysterious ring of stones and is transported to 1743, beginning a series of adventures that span 8 books so far.

She arrives in the midst of a battle, which she first mistakes for a reenactment of some sort. Next thing she knows, she's a "guest" (more like a prisoner) at a castle, with everyone wanting to know where she came from and not believing her. They think she's a spy, and eventually a witch, and although all she wants is to get back to her own time, it's impossible to get away with everyone watching her. I don't think it's too much of a spoiler to say that she's forced into a marriage for her own protection, and it turns into a genuine romance.

This was a very long book. My edition was around 630 pages, but it read really slowly. It wasn't boring or hard to get through, just slow-moving. And I'm not sure why because it was missing a lot of the introspection I was expecting. Claire spent very little time pining away after her old life with it's cars and flush toilets, and she barely struggled at all to figure out how to live life in 1743. She seemed to fit in easily once she got some appropriate clothing. I would think if I were in that position I'd be bumbling about trying to figure out how to do basic daily tasks, while constantly panicking about the loss of my old life and comparing the two. It seemed like most days she just went about her business with barely a thought about how much she missed her husband or anything else.

So that was a bit strange, but still I mostly liked reading it. Oh, Claire could be a bit stupid, refusing to listen to other people who knew more than she did about living in that time period, but I liked her well enough. Jamie, her sudden husband, took a bit of getting used to but seemed like a decent guy and I liked how their relationship unfolded. Claire also made acquaintance with an interesting woman named Geilie who had some secrets of her own, as it turned out.

There was a great conversation at one point in which Claire has confided in a clergyman and asks for advice regarding her potential to change the future. He responds to her with something I've been thinking about recently after - and I hate to admit this - I saw it in a meme. I don't remember the meme exactly, but it said that when we think about time travel we always worry about how the tiniest action could affect the future in major ways, but we don't think about how in regular life our small actions can also affect the future. The future is the future, whether we've been there already or not. So the clergyman tells Claire basically the same thing, that everybody's actions affect the future and she shouldn't overthink things.

I went into this with the intention of just reading the one book, and I don't know that I loved it enough to read more, but also I'm a bit intrigued. I read the descriptions on Goodreads of the next two books and they sound kind of interesting, but also I'm confused about how the timeline fits together (although there's time travel, so.) At any rate, it was a pretty engrossing and enjoyable book.
Posted by 3goodrats at 10:35 AM