The Right Swipe by Alisha Rai (2019), narrated by Summer Morton and Brian Pallino 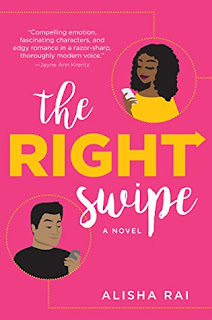 Rhiannon Hunter was ousted from a dating app company called Swipe after breaking up with one of the executives, and she went on to start a competing company called Crush. Now she's interested in expanding her business by buying Matchmaker, a more traditional old-timey kind of dating company. While attending an industry event, she runs into a guy she hooked up with months ago who ghosted her, and then learns that he works for Matchmaker.

Samson Lima was a pro football player, as was his father and uncle. His father died of CTE, and that is likely also what killed his uncle. Now Samson is working for his aunt, owner of Matchmaker. When he sees Rhiannon for the first time since their night together, he wants nothing more than to apologize and explain what happened, but she won't talk to him.

Rhiannon made a lot of assumptions, which is a thing I find annoying, and she kept doing it right through the end of the book. There were ways in which I could admire her, but I didn't find her interesting. She was an ambitious workaholic who didn't seem to have any interests outside of her business, and I am just not interested in characters whose lives are that empty. Samson was a little more nuanced, I suppose, since he was dealing with the repercussions of how he left his career, the traumatic brain injuries suffered by his father and uncle, and his struggle to figure out what to do with his life next.

The story had some interesting elements: CTE, the harassment Rhiannon experienced at her old company, her decision to make a dating app that is more female-friendly, and the interesting way the owner of Matchmaker decided to let potential new owners make their offers (basically a somewhat mysterious house party.) So I guess it was a solid story, but not especially awesome.

I listened to the audiobook, and both the narrators were good but their voices were almost too different to make it flow easily between their chapters. Brian Pallino's voice was so low and whispery compared to Summer Morton's that I often had to adjust the volume between chapters.

My expectations for this book were set by Alisha Rai's Forbidden Hearts series, which was excellent and made this one disappointing in comparison. This was a totally different book - upbeat and light where that series was  super dark and angsty - so I probably shouldn't compare them but I can't help it. I will continue to love Alisha Rai, but I may just stick with her darker, more serious, books from now on.
Posted by 3goodrats at 10:22 AM