It Takes Two to Tumble 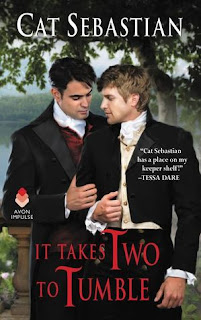 Captain Phillip Dacre has been away at sea for 2 years, but wants to make his visit home as short as possible. His wife is dead, his children running wild, and he's basically a stranger in his own home. Ben Sedgwick, the vicar, has been enlisted to to take care of the three hellions after they drove away every governess or tutor to be found. He has a way with them, it turns out, and now it looks like he might have a way with their stern father as well.

Phillip is all about order and following commands, and when he sees the way Ben indulges his children's whims, he doesn't approve. But he soon sees that Ben just knows how to engage them and direct their energies in less destructive ways. He also can't help but see how attractive Ben is.

Ben is also not blind to Phillip's charms. Although he's a vicar he's unconcerned about this sort of sin because he interprets the Bible in his own way. His worry is that Phillip will just be leaving again soon and will be gone for who knows how long. Other unrelated worries also start to plague Ben, regarding his family history and how it may affect his present and future.

Everything about this story was pretty charming. I liked the personalities of both the men and was definitely rooting for them. The problems with the kids gave them something to focus on and bond over, while still keeping things fairly light-hearted. They both had interesting histories too. Phillip was clearly mourning and Ben thought at first it was for his dead wife, but it was actually for a man aboard his ship. Ben has a tense relationship with his father, whose lifestyle we'd probably describe as Bohemian these days. It was a strange childhood, living with his father who essentially had two wives, and Ben isn't quite over it.

It wasn't too hard for them to come together, and I'd say the conflict is mostly about them trying to figure out what their relationship will be. Phillip assumed it would be purely physical, because that's all he thought possible, but he became so fond of Ben right away. He also worked hard at his relationship with his kids, which made him reluctant to leave again for his ship. Of course they eventually worked it all out and I found everything to be quite satisfying. I've heard of Cat Sebastian for years but had never read any of her books, and now I'm glad that I finally picked one up!
Posted by 3goodrats at 10:25 AM