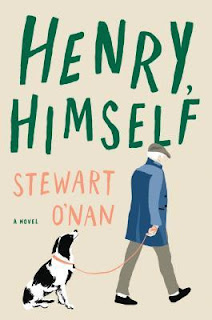 Henry Maxwell's wife was the star of O'Nan's book Emily, Alone which took place after Henry's death. Now we get a close-up of their life together that focuses on Henry. There's no real plot here, it's just a detailed year in Henry's life, beginning in the winter and ending early the following year. They go to their summer place in Chautauqua, along with their kids and grandkids, and see them all again at various holidays. In between, we get their day-to-day life at home, all their chores and routines and everyday life with their long-lived dog Rufus.

It's not worry-free, though. Their daughter Margaret, who has battled substance abuse, is having a rough time in her marriage, and Emily has a tense relationship with their son Kenny's wife. Henry's doctor is ill too, so Henry has to reschedule a needed appointment and go to another doctor, all the while worrying about Dr. Runco, who is around his own age and who he has been seeing for decades.

I was struck by how busy Henry was all the time, all the little tasks and chores he had to do around the house. To some extent, he probably should have hired people to do some of the household repairs as he was almost 75 and installing a new mailbox himself was a bit too much. But it also made me feel better about how busy I feel, because I work full time and find household chores overwhelming most of the time. Henry is retired and all the requirements of life still keep him pretty busy.

It's strange to read it knowing that he will die and leave Emily a widow, and I spent some time trying to remember if his cause of death was ever mentioned in Emily, Alone. It doesn't matter though; he spends enough time thinking about his own mortality, I don't need to rush him along. Life changes are a common theme in the novel, as Henry thinks about family traditions and how they may change and who may be absent in the future. People die, grandchildren grow up; it's bittersweet.

As with most of O'Nan's books that I've read, the beauty is in the details. I don't know why it's so wonderful to hear every single mundane detail of life, but it is somehow very affirming as a human being. I've really enjoyed several of his books, though I think the last I tried to read was West of Sunset, which I abandoned 70 pages in. Now I realize that his book with the highest rating on Goodreads is A Prayer for the Dying, which I haven't read, so that's going on my list to read next.
Posted by 3goodrats at 8:06 PM