Mary Toft; or, The Rabbit Queen by Dexter Palmer 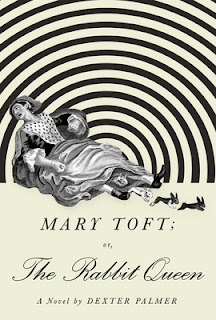 There's a story from the 18th century about a woman named Mary Toft, who gave birth to 17 dead rabbits, confounding the medical community. In this novel, Dexter Palmer has taken that story and added a rich cast of characters and created a narrative that makes readers think about the nature of truth, and all the ways in which we deceive ourselves and others.

It begins in the town of Godalming, England with a kid named Zachary, brought by his mother to Dr. John Howard, who treats his tonsil abscess so successfully that Zachary is inspired to pursue medicine himself and becomes Dr. Howard's apprentice. He begins learning the trade, and then observes a case which confounds even the experienced Dr. Howard: they are called to the house of a woman in labor, and she gives birth to a mass of rabbit parts. Then, a week later, she does so again. And again every few days. Out of desperation, Dr. Howard writes to some medical colleagues in London, and here the story begins to spread and take on a life of its own.

Along the way, Zachary meets Anne, an intriguing young woman with a port-wine birthmark across most of her face, who travels with her father's "curiosity show." It's basically a freakshow when Zachary goes to see it in Godalming, a parade of people with unfortunate and shocking conditions. Zachary and John Howard watch it together and then discuss which people were real and which were hoaxes. Later, when they are in London, Zachary sees a darker version of this show, one which features shocking animal cruelty and reveals a very disturbing desire among London's very wealthy.

This book contains a lot of fodder for thought and discussion about human nature. It questions the very nature of truth, and suggests that if enough people believe something, then it becomes true, and illustrates the power of groups to influence how we think and act. One character presents the idea that humanity is a finite resource that some people try to take from other to make themselves more human and, in so doing, make those others less so (think slavery.) It is clear that at least some of the doctors thought themselves more human than poor Mary Toft, a subject of curiosity and awe to them, but not an actual person with feelings, whose welfare they cared about.

It's easy to forget while reading this that the same author wrote Version Control, because they are so very different from each other. But it's clear that Dexter Palmer is an incredibly talented and creative writer, one whose books I will continue to anticipate.