Midnight in Chernobyl: The Untold Story of the World's Greatest Nuclear Disaster by Adam Higginbotham (2019) 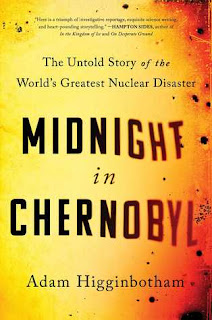 I was on the cusp of 13 when the disaster at Chernobyl occurred so I was completely unaware of it until probably years later, and even then I didn't know much about it. But I heard a lot about this book recently and was further inspired to read it after Baba Dunja's Last Love, a novel that took place with the Chernobyl disaster as a backdrop.

Higginbotham has put together a detailed account of the time leading up to the disaster, how things went wrong, and the aftermath. It was fascinating and stressful to watch it all unfold, even though I knew it ended in disaster. It's so hard to watch that train wreck coming.

I appreciate that we didn't get the entire history of the Soviet Union or of nuclear energy before getting to the real story. Too many nonfiction books dump far more background information than needed, and though I did get a little bit bogged down in the explanation of how the reactors work, that was tough because of my poor understanding of science, not because it was unnecessary. There was enough story here to not have to pad it. This might be a good time to mention that the book isn't as daunting as it first appears; although it's over 500 pages, the main part of the book is 372 pages, with the rest being the afterward, notes, and even an index (how I love an index in any nonfiction book!) There were SO many people in this story it was hard to keep them straight, but there's a helpful list of everyone in the front of the book, which I also appreciate.

What most surprised me about how this disaster went down was that even though there was an explosion, it wasn't especially dramatic. Nobody knew how bad it was just after, so people were still going about their business in the nearby town of Pripyat for quite a while before being evacuated. Although radiation traveled quickly to Scandinavia and other areas, you do need special equipment to detect it, so it wasn't always obvious right away. Of course, the government cover-up didn't help, but there was a real lack of information and poor communication also. The seriousness of the situation wasn't known until later, and the consequences definitely weren't dealt with for far longer than they should have. I couldn't believe how long they debated where or not to evacuate people who lived in the area. And even then, people were willing to still work at the plant to try and get the other reactors back up and running. I actually have questions about this still, because I don't quite understand how people were going to work here every day when nearby Pripyat had been permanently evacuated because of the danger.

I was also surprised to learn how many other disasters had occurred before Chernobyl. This, too, was covered up as part of maintaining the illusion of Soviet superiority when it came to nuclear power. They just kept blaming it on operator error and continuing on with other nuclear projects, though eventually they had to admit there were serious problems with the design of the type of reactor they were building. (There were human errors as well, to be sure.) But Chernobyl was a larger disaster that was impossible to keep secret, and it resulted in a legal trial and changes to the way reactors were built.

I thought Adam Higginbotham did a great job of giving us a full picture of this disaster and the circumstances surrounding it, without getting bogged down in too much extraneous detail. For a nonfiction book about a well-known historical event about which we all know the ending, it was quite a page-turner.