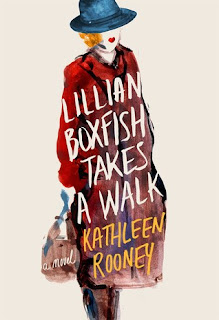 It's New Year's Eve of 1984, and Lillian Boxfish is setting out for a walk that will take her all over New York, meeting new people as she visits places where significant milestones took place and thinking back over her life. She's in her 80s now (and yes, she still loves to walk everywhere), and in her youth she was the highest paid woman in advertising. She wrote ad copy in the form of poems, and also published some books of poetry. She got married, and then divorced. She had a son who is trying to get her to move to Maine, but she loves New York with all her heart, even after a subway vigilante attack that still has everyone in the city on edge.

This meandering story was nostalgic, but Lillian is anything but stuck in the past. In fact, her past has some pretty dark episodes she'd like to forget. No, even in her eighties she is interested in meeting people and will strike up a conversation with anyone: a photographer in a park, a clerk in a bodega, a teenager who is currently mugging her. She's truly interested in other people. She also admits to liking rap music, which makes sense since she's a poet but she does lament that other people her age aren't interested in it. During the course of the evening she has dinner with complete strangers, attends a party with a friend who is in her thirties, and of course walks miles and miles. I was dying to know what she wears for shoes, to be honest.

Lillian was not a marriage-and-family kind of woman. She never planned to become a wife or mother, but wanted to focus on her own career and interests, which really set her apart from other women of her time. But when she fell madly in love with a coworker from another department at Macy's she didn't hesitate to marry him. She resented having to give up her job, but she kept freelancing, which worked out pretty well. At any rate, when the marriage fell apart, she never remarried and was very content to stay alone. She really knew herself and wasn't afraid to live her life the way she wanted to, regardless of what other people might think.

I liked how open-minded Lillian is, while still having opinions. She was once invited onto a tv show with some younger women in advertising, where they basically insulted how advertising was done in her day. Lillian said she thought advertising was "to communicate and persuade, but now it seems like you just prod at a brain stem to get someone to buy a thing without even knowing why." I think she's onto something. I also sympathized with her displeasure when she visited a bar to find that they had installed a tv. And it isn't that she doesn't like tv, it's that she highly values being social. She is opinionated without being a curmudgeon. I also like that she walks everywhere because I do a lot of walking myself.

Despite not really being in the mood for this book when I started it, I did end up enjoying it. I had just finished Henry, Himself and two books about older people looking back over their lives is a bit much, but that was the book I had available at the time. It was pretty fun and enjoyable.
Posted by 3goodrats at 9:06 PM