Catch and Kill: Lies, Spies, and a Conspiracy to Protect Predators by Ronan Farrow (2019), narrated by the author 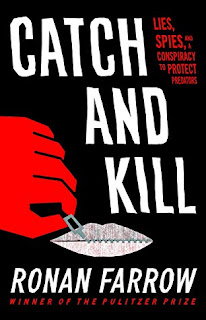 Ronan Farrow is the journalist who broke the story about Harvey Weinstein's pattern of abuse, pursuing his leads despite pushback from NBC. He documents the whole crazy story here, including his interviews with Weinstein's victims, interactions with NBC executives who refused to run the story, and a creeping sense of paranoia that turned out to be very well-founded when he discovered he was being watched by a surveillance team hired by Weinstein.

It's hard to know where to start here, and I don't want to recount the whole story because there's too much of it and you should really read it, so I'll pull out a few things I found especially interesting. One is that he worked closely with NBC News producer Rich McHugh on this story, and McHugh was the only person at NBC who really stood by him through all of it. The two continued to be confused about why NBC kept telling them they didn't have enough, even though they had women on camera telling their stories and a recording of Weinstein admitting to his behavior. Which is the second thing - the audiobook actually included this clip from an NYPD sting operation, in which Weinstein tried to get Ambra Gutierrez to go to his hotel room with him, admitting that he was "used to" forcing himself on women the way he had done with her the day before. That was really hard to listen to. I felt really gross just from hearing it. I was shocked and heartened that when Gutierrez went to the police, they believed her. Another heartening part of the book was that Farrow often went to veteran news anchor Tom Brokaw for advice, and he supported Farrow and his work and kept encouraging him to make sure the story was told.

Mostly I found the story horrifying and enraging. That Rose McGowan's lawyer told her she wouldn't be believed because she had once done a sex scene. (What does that have to do with it?) That tabloids like the National Enquirer helped Weinstein by smearing his victims and buying stories about his abuse and not running them (which is what "catch and kill" refers to.) That so many people helped cover up this guy's crimes. Even Hillary Clinton refused an interview with Farrow about something entirely different when she learned he was working on a story about Weinstein. Women who helped protect Weinstein was mystifying. The fact that non-disclosure agreements are a thing that is legal - Weinstein would regularly pay off women who he hurt and make them sign an agreement they wouldn't talk about it. What kind of a world do we live in where that is ok? Beyond the legal agreement, all the women were terrified to speak because they knew Weinstein was powerful enough to kill their careers and their reputations. And there were just so many parts in which men hemmed and hawed over whether or not any of this was enough of a big deal to be news. We're talking about rape here. I wanted to punch these guys. And it's all a great lesson about bias in the news, and why you should get news from a variety of sources.

In some ways it wasn't the best choice for audio for me because there were SO many people and it was hard to keep track. But I don't know if I ever would have picked up the print book, and Farrow does a great job of narrating. I was listening to this while reading The People in the Trees, which is about a man in prison for sexual assault, and still listening to it when Elizabeth Warren dropped out of the presidential race leaving us with old white guys as the only remaining viable candidates. So I was (am) pretty full up on patriarchy and really honestly glad to be done hearing this story.

Still, it's such an important story to tell and Farrow faced so much difficulty in doing so. I wasn't familiar with him before this book, but I can't help admiring him after what he went through to get this story out there. Of course the outcome wasn't known at the time of publishing, but I'm glad I read it knowing that Weinstein was heading to prison.
Posted by 3goodrats at 5:58 PM