The Sundial by Shirley Jackson (1958) 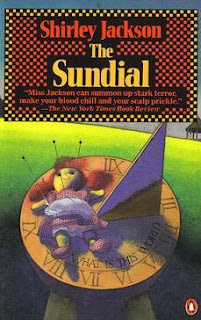 The Halloran family is gathered together for a funeral - poor Lionel, apparently pushed down the stairs by his mother, Mrs. Halloran. While they are gathered, eccentric Aunt Fanny receives a communication from her dead father, warning the family that the world is going to end and only they will be saved. They must remain in the house together to await the apocalypse.

I didn't actually know what this book was going to be about, but luckily I am unbothered by reading about people hoarding food and supplies for their isolation period at home while it is happening all around me in real life. It is never a bad time for a Shirley Jackson novel.

Honestly, the matriarch of the family murdering her own son became quite beside the point, but lent a lot of dark humor to the story. Lionel's widow and daughter brought it up a lot at first, but then everyone became consumed by the dead Mr. Halloran's prophecy. Everyone had to decide whether or not they were on board with the plan to hunker down and wait for the world to end, and most of the family went along with it. They also had some hangers-on who weren't family - Essex, who had been hired to catalog the library but who the family ended up treating as a general servant and source of advice. A late arrival known only as "the captain" was the only other male aside from Essex and the unwell Mr. Halloran who kept to his wheelchair and seemed very confused most of the time. This is important because after the apocalypse this group would need to repopulate the world and there were more ladies than gentlemen so there was a bit of competition for attention.

The subject is dark, but like I said it was pretty funny too. People just outwardly insulted each other in a fairly carefree way, and there was a good deal of ridiculous melodrama. It was slightly creepy and ominous and enough was left open to maintain an air of mystery. I thought it was great - I continue to love Shirley Jackson's work more and more.
Posted by 3goodrats at 12:58 PM