The People in the Trees

The People in the Trees by Hanya Yanagihara (2013) 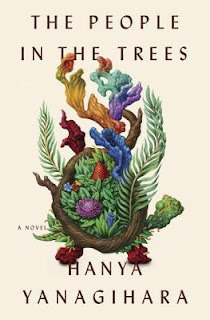 Norton Perina graduated from medical school and didn't know what to do with himself, so he accepted an offer to accompany an anthropologist on an expedition to a small island in Micronesia. There they hoped to find a tribe that had been rumored about but never studied. They found the tribe, as well as some others who lived apart from them in the forest and appeared to be in a state of mental deterioration. Perina's discovery about the secrets of these long-lived people launch his career and even win him a Nobel prize. However, the book begins with Norton having been arrested for sexual abuse, and most of the book is his story he has written from prison, introduced and edited by his good friend Ronald Kubodera.

It sounds like it would be very interesting, but in fact I found most of it quite tedious. It was initially kind of interesting, a young Perina traveling to such a remote place and learning about a new culture, and detailed descriptions of the jungle and the people and their rituals. A lot of the book was this initial trip, which was significant, but eventually it got kind boring, and there's a lot more story that was rather glossed over later. He made many other trips to this and other locations; he adopted dozens of children; presumably other things happened in his life, but we only ever hear about his work, and after that initial visit several decades were basically summed up in a blur. It honestly felt rather pointless.

Of course what the reader wants to know is about the alleged sexual abuse of these children, which doesn't get addressed at all until the very end. Late in the story, which was full of footnotes with explanations by Kubodera, a footnote says that he decided as editor to remove the next passage. Ok. But then he presents that missing passage at the very end, and it is the part of Perina's story that addresses the abuse. I don't know what Yanagihara thought would be gained by leaving it out and then including it just a few pages later, but whatever it was I don't think it worked. Also, I don't understand why both Perina and Kubodera insist on Perina's innocence.

But it's hard to know what Perina thought or felt about anything. He tells his story in such a logical way, and it is clear that he doesn't have a normal range of human emotions, nor does he seem to have any sort of moral or ethical beliefs. This might be a good spot to mention the many instances of animal cruelty described in the book, which I found very unpleasant and which Perina is completely unbothered by. He is a scientist through and through and only wants knowledge and data and clearly does not care who is hurt in order to get it. He also talks about the people he studies as "backwards" and describes them in ways that are unfeeling at best, often mentioning how ugly people are. I often like an unpleasant characters, but his schtick wore pretty thin. Possibly because I am tired of old white men who feel entitled to do whatever they want to anyone they want and he is just one more of these. We have enough of those in real life, I don't need more of them (and from a female author, no less.)

I read Yanagihara's other book, A Little Life, and loved it. Loved it. I knew this was going to be a very different book, and did not go into it expecting it to be anything like her second book. But I did hope it would be good, and populated with compelling characters, and in that I was disappointed. About halfway through I actually considered putting it down, but decided to continue, and I kind of wish I hadn't. The story has a great premise but the execution really fell flat.
Posted by 3goodrats at 8:22 AM

I had the same feelings. I don't why the story had to be so coy about whether Perina committed the abuse. He was a privileged entitled white guy who obviously looked down on the island people, so yeah, in my mind, of course he did it.