Josh and Hazel's Guide to Not Dating

Josh and Hazel's Guide to Not Dating by Christina Lauren (2018) 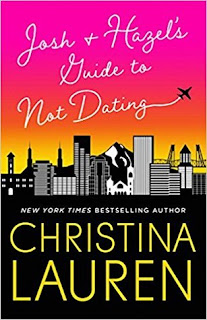 The first time Josh and Hazel met, she was drunk and propositioned him before throwing up on his shoes. She has no restraint whatsoever, says whatever she's thinking, and is totally wild and carefree. Josh, in contrast, is mellow and sensible and not at all her type, obviously. Many years after college they meet again, unexpectedly, and become friends. Platonic friends. They start going on double blind dates, fixing each other up with a series of increasingly unsuitable potential partners. But of course, they really just want each other.

Hazel was great. She's a third grade teacher who definitely understands eight-year-olds and lives in an apartment with a dog, a rabbit (Janis Hoplin!), a parrot, and a fish. She is the sort of person who is considered "too much" by many people, even "embarrassing." She knows this and she knows why, but also doesn't try to change who she is. I love that her mother is the same way. They have a great relationship that I really enjoyed, and seeing how people like her father treated her mother only makes Hazel more determined to stay true to herself.

Although Josh is totally different, he finds Hazel to be a lot of fun. She's genuine and a great person and seems to like his family. She's best friends with his sister Emily, also a teacher, and makes an effort to get to know his parents, unlike his recent ex-girlfriend Tabby who was totally uninterested in his family. When he and Hazel get together, it is always an adventure.

So what's keeping them apart? Their newly-developed friendship is so important to both of them that they don't dare risk losing it. Hazel worries about being way to obnoxious for Josh and Josh thinks he might not be enough for Hazel. Of course, they can only put their feelings aside for so long.

The only thing I didn't love about this book was that the epilogue is several years in the future, which is something I almost never like. Otherwise, it was just exactly what I needed right now. So funny, so sweet, so quick to read - I think I read it in about 36 hours. I almost wish I had slowed down to make it last longer, but it's like candy and I couldn't resist.

I also really liked Christina Lauren's book Dating You / Hating You so I guess now I can consider myself a fan. I'm definitely in a space where I'll probably be reading a lot more romance so I may check out their other books.
Posted by 3goodrats at 11:31 AM