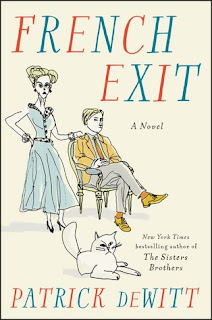 Frances Price is well known because twenty years ago when her husband died at home, she responded by leaving on her planned ski trip and didn't report his death until she returned. Now, she and her adult son Malcolm have lost all their money, and are moving to Paris to live in Frances's friend Joan's apartment. Coming with them is their cat, Small Frank, who Frances is convinced is actually her dead husband in feline form.

They are a strange pair, Frances and Malcolm. Mother and child BFFs, more devoted to each other than anyone else, including Malcolm's fiance who he left behind to go to Paris. No question he'd choose his mother over her, which was fine with Frances, who didn't even like Susan to begin with.

On the way over, they meet a psychic aboard their ship (they are the sort of people who travel by ship) with whom Malcolm has a brief affair. Her name is Madeleine and when she sees their cat, she knows he's not a regular cat. Once settled in Paris, Small Frank run away and Frances decides she needs to find Madeleine, who could help them find, or communicate with, Small Frank. She hires a private investigator to find Madeline and soon, both of them are hanging out at the apartment with Frances and Malcolm, along with Joan (the owner of the apartment), a wine seller, Malcolm's ex-fiance and her boyfriend, and I think a couple of other people I can't even remember. It's a bizarre assortment of people, and unclear why they all remain hanging about, but it adds to the comedy of the situation.

It's a dark comedy though, which is the kind of comedy I like best. Frances and Malcolm are not likable people at all, so even though you're left not caring what kind of end they come to, it's fascinating to watch it happen. Their friends and hangers-on comprise a motley assortment and I've just realized what an amusing and entertaining movie this would make. I've also heard that the audiobook version is spectacular. There are so many strange and quirkly personalities here, and such a great premise, it was bound to be a lot of fun. Dark, twisted fun.
Posted by 3goodrats at 10:13 AM