Fly Away Home : a review 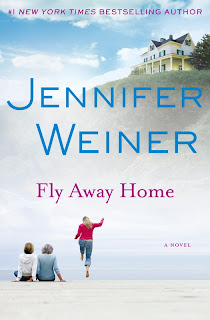 It happens all the time: a famous person’s affair is exposed, the media has a field day, and then the story fades into the background as the nation’s collective attention turns to the next scandal. Just such a story provides the backdrop for Jennifer Weiner’s latest novel, a firm departure from the chick lit genre that she is almost always relegated to but of which she was arguably never really a part.

Senator Richard Woodruff owes much of his political success to his wife Sylvie who has sacrificed her own career, interests, and even style of dress to be part of his team. Nary a gram of fat has passed her lips in decades, ensuring that she continues to fit into the designer suits required of a senator’s wife. Their two grown daughters, Diana and Lizzie, were raised largely by a nanny, and developed an understanding that their parents were public figures and couldn’t be expected to deal with the minutiae of everyday family life. Now a successful doctor, Diana is nevertheless troubled in her marriage, whereas Lizzie has had the more public distinction of being a drug addict.

When the nightly news reveals that Richard had an affair with a much younger colleague, their - albeit imperfect - family is turned upside down. More vulnerable than ever, each women struggles to make sense of her own problems while the future of her family becomes increasingly uncertain.

More serious than Weiner’s previous novels, it retained traces of her humor while exploring the very private side of the kind of situations that are usually dwelled upon only long enough to be made the butt of jokes. Every character in this book was imperfect and complicated. I felt very invested in their problems and their futures, and wanted to spend more time with them.

Jennifer Weiner is like Ben and Jerry’s ice cream to me. Each flavor is not only creative, but well executed and delicious. Weiner’s writing is impressively consistent, and that is unfortunately rare. With a debut like Good In Bed, Weiner had a lot to live up to, but she has risen to the occasion and proven herself again and again. I look forward to her every book with unguarded glee because I know it’s going to be good, and Fly Away Home is one of her best.
Posted by 3goodrats at 9:26 AM