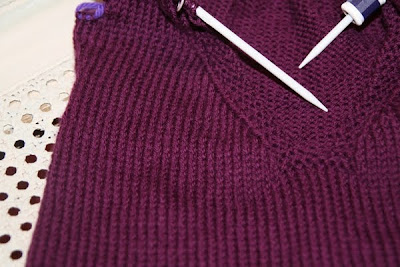 Do you know the story of Sisyphus? In Greek mythology this king was punished by the gods by being forced to push a huge boulder up a hill, and then it rolls back to the bottom, and he must continue to push it up the hill over and over and over forever until the end of time.

As you might suspect, I bring this up for a reason. On my pullover there is a set of waist decreases, a bit of straight knitting, and then increases, all while simultaneously decreasing the neckline. Recently I completed the decreases and knit until it was time to start increasing, and set the project aside for several days. A couple of nights ago I picked it up again while watching some old episodes of Lost and knit the 12 rows that included all the increases, while continuing the decreases that shape the neckline.

When finished, I compared my stitch count to the pattern and was shocked to find that I was off. My first thought – because I am rather egotistical as a knitter – is that there must be an error in the pattern. But some simple math proved that to be untrue, and I finally had to accept the fact that when I picked up my knitting that evening I actually was not at the point where the increases were supposed to start. I hadn’t bothered to actually compare my stitch count before starting to knit; instead I relied on my faulty and aging memory and that never ever serves me well.

So I ripped out everything I had done, knit the few more rows that brought me to where I should be, and then started the waist increases in the proper place with the correct stitch count. I tried to stay up late enough to finish them for the second time, but finally had to call it quits with still a few rows to go.

What is so frustrating about this is that I haven’t learned from my mistakes. I can’t even count how many times I’ve spent what feels like a very productive evening knitting, only to end up ripping out everything I did and starting all over again. But although it can feel that way, unlike Sisyphus I am not on a futile quest. Though it may take longer than it should, I will at least end up with a new sweater for my efforts. Eventually.
Posted by 3goodrats at 8:34 AM