Garlic and Sapphires : a review

Garlic and Sapphires: the secret life of a critic in disguise by Ruth Reichl (2005) 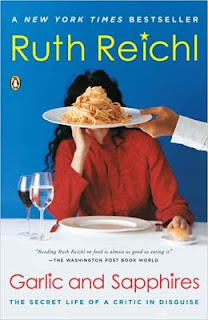 Food writer Ruth Reichl documents her experiences as a restaurant critic for the New York Times, taking the reader to New York’s finest – and not-so-fine – restaurants, describing her meals, sharing her reviews, and discussing the challenges she faced as a well-known critic trying to slip under the radar to find out how ordinary people would experience the restaurants she visits.

I will admit right now that I was skeptical when my book group chose this book. I think I’ve mentioned before that I have a hard time with non-fiction –as interesting as the subject of a book may sound, reading it can be another matter entirely. But I had forgotten something important, which is that I really like food. Reichl’s descriptions of food were more satisfying to me than some of the actual meals I have eaten in restaurants. Even her narratives about foods that I would never eat, like fois gras, were conveyed with so much pleasure that I enjoyed the meal vicariously through her descriptions.

Dressing in disguise added a fascinating dimension to her story. Reichl developed characters, complete with different personalities, and visited restaurants incognito to find out if the quality of food and service she received as Ruth Reichl, Food Critic was the same as when she dined there as a cranky old woman, a sophisticated lady who lunches, or a loud, brash lower-middle class woman. This sociological aspect was enlightening, as it never occurred to me that the service or table one receives in a restaurant could be based on appearance. But then again, I live in Boston where even the classy restaurants don’t appear to have dress codes.

As fascinating as the story was, mostly this book just made me want to eat. In New York, and preferably on someone’s else dime.
Posted by 3goodrats at 2:14 PM

Her first two memoirs, "Tender at the Bone" and "Comfort Me With Apples" are both good; I'm hoping she writes about her tenure as editor of Gourmet magazine next.

Chris, I have heard of both of those of course, but never felt inclined to read them. Now I just might!