The Girl Who Kicked the Hornet's Nest : a review

The Girl Who Kicked the Hornet's Nest by Stieg Larsson (2007) 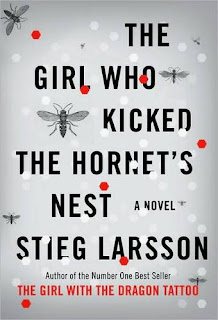 When we last left Lisbeth Salandar she had barely escaped death at the hands of those responsible for the murders she was accused of. Thus, the third and final installment in Stieg Larsson’s überpopular Millennium series begins with Lisbeth unconscious in a hospital, where she remains for much of the book. Awaiting her recovery are various people trying to gather information to prove her guilt or innocence, as the case may be. Much of the book centers around a secret organization within Säpo, the Swedish secret police, which was created to protect Soviet defector Alexander Zalachenko and was also responsible for institutionalizing Salandar when she was 12.

For me, this novel lacked the momentum of the first two in the series. It was tough getting into the details of Säpo, and I missed Lisbeth who spent much of the book completely out of commission. Even Mikael was pushed aside in favor of many new characters in whom I struggled to be interested. But Lisbeth recovered and she and Mikael returned to a prominent spot in the story eventually. Another interesting storyline centered on Erika Berger, who left Millennium to work for a newspaper and became the victim of harrassment. By the last 150 pages I was zooming along as I had been in the first two books and though the climax was less dramatic (and violent) than in the previous books, I found the ending quite satisfactory.

One thing I enjoyed about this series was how unconventional Larsson made the relationship stories. Erika Berger’s open marriage was unusual, and I thought he kept the romances realistic, without resolving into predictable fairy-tale endings. Of course this was a thriller, not a genre I usually read, so perhaps that is typical. Or maybe it’s a Swedish thing.

The characters were also a strong point. Though at times I had difficulty keeping track of the minor characters, the major players were well-developed, complex and imperfect. As much as I rooted for Lisbeth Salandar, she isn’t someone I’d ever befriend – indeed, she had few friends – but she was incredibly strong and a brilliant hacker. Mikael was practically impossible for his colleagues to keep track of, and was frustrating for the many women who were interested in him romantically, but a great journalist with a strong code of ethics and sense of justice.

Have any of you read the series? Or seen the movies? What did you think? I’m looking forward to watching the Swedish movie version as I suspect this series translates well to the screen.
Posted by 3goodrats at 10:10 AM