This Yarn Is Cursed

I have tried and tried to find a pattern that will work with my skein of Madelinetosh yarn in "Bearded Iris," but no matter what I do it pools into big gobs of purpliness and separate big gobs of yellowyness. I am shocked to look through my old posts and see that I haven’t written about this ongoing and apparently futile struggle. But I have been documenting it photographically so I will summarize for you now.

First I tried the Herringbone Rib pattern from Knitting Socks with Handpainted Yarn. This pattern was one of the reasons I bought this book – it is so lovely, but not with this yarn. 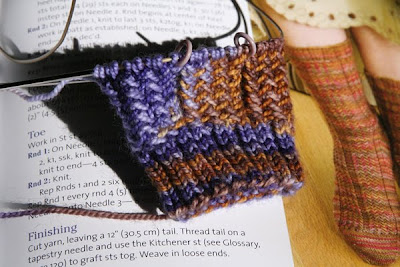 Cleverly, I thought that with a different size needle it may not pool the same. I was right, it pooled in a slightly different way. 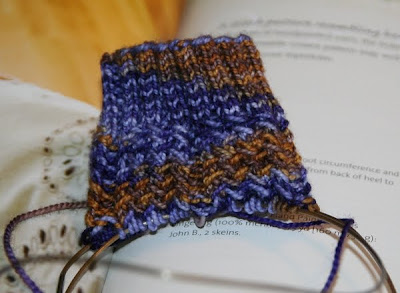 It was a bit less blotchy and more like a thick zigzagging stripe, but still not acceptable.

Determined not to give up, next I tried a simple rib pattern. 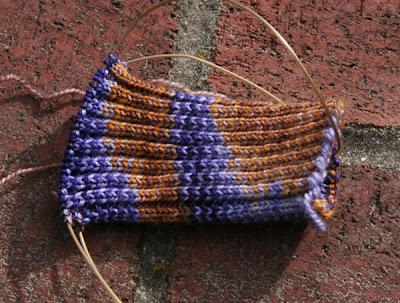 And you can see how well THAT turned out. I'm mystified about why I knit so far before admitting defeat. (I was probably watching Pride & Prejudice or some equally long and distracting movie.)

I shoved the sock in a bag for a while until several months later I was feeling masochistic again. I went back to Knitting Socks with Handpainted Yarn and tried a pattern called Rib Fantastic, which allegedly "swirls the colors around." Surely that is what I need! 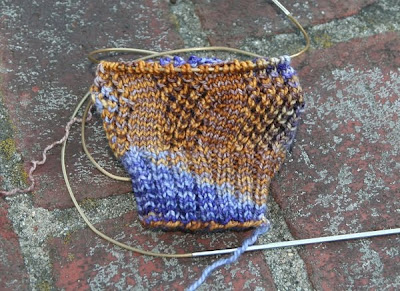 The colors were not sufficiently swirled. The other side of the sock, as you might expect, is primarily purple.

Finally, convinced that much more abuse would render the yarn completely unknittable, I ripped back to the cuff and continued in stockinette. 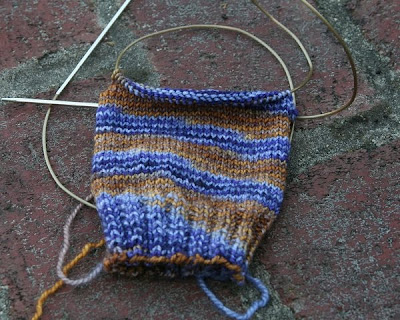 So bland, so boring, but these lopsided stripes are the most acceptable look I’ve gotten from this yarn so far.

What were the good people at Madelinetosh thinking when they designed this colorway? Do they not test knit their yarn? Or is the goal for it to simply look nice in the skein? Perhaps they don’t even think ahead to the possibility that someone may want to knit something out of it. I can’t think of another explanation as to why they would put such beautiful colors together in a way that looks so clumsy and unpleasant when you try to make it into something.
Posted by 3goodrats at 7:00 PM

Try the aquaphobia pattern. I know the designer. :-)

I think I am committed to the stockinette for this one, but I have queued aquaphobia for next time - I wish I had known about that pattern before! Thanks for the tip :)