Full Dark, No Stars : a review 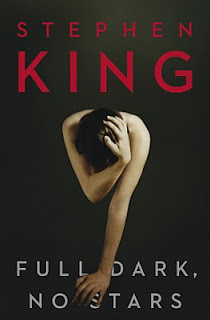 Like Different Seasons and Four Past Midnight, this new collection from Stephen King consists of four long short stories. In the first story, “1922,” a farmer murders his wife, who has threatened to sell off part of their farm so she can move to the city. Though the crime is covered up from the authorities, the farmer - and his son who he enlisted to help with the crime - are subsequently haunted in different ways. “Big Driver” is a man who rapes a cozy mystery writer on her way home from a reading, but instead of reporting the crime to authorities, she chooses to wield her own justice. The third, and shortest, story is “Fair Extension,” in which a man dying of cancer makes a deal with the devil to save his own life, thus damning his best friend and his family. Finally, in “A Good Marriage” a woman learns that her husband has been committing horrific crimes for decades and she must decide what, if anything, to do with this new knowledge.

Though all the stories were good (I hesitate to use a word like “enjoyable” when describing horror), the first and last were the strongest. “1922” was the most like a traditional horror story in the amount of violence, gore and creepiness. What I liked the most about this story is that it was mostly realistic, with just a hint that maybe there is more going on. Is that corpse speaking to the farmer from beyond the grave? Are those sinister-looking rats planning something? Or is his imagination just playing tricks on him? That doubt is as close as it gets to supernatural, but it is enough. It’s a sad story too: the son’s loss of innocence, the destruction of a family, rendering the original plan to save the family’s farm completely pointless.

My favorite by far was “A Good Marriage.” King got the idea after the BTK murders, when the killer’s wife claimed she knew nothing about his crimes. Similarly, the wife in this story was happy in her life and satisfied with her marriage, until one day she stumbled across evidence of her husband’s secret life. Of course this changed everything, no matter how much she wanted to pretend it didn’t. The story was unpredictable and the ending clever. King does a good job of putting ordinary people in extraordinary circumstances, and it’s easy to imagine being this woman. There is nothing supernatural here, but it is a deft exploration of the dark side of human nature and the reader can’t help but wonder “What would I do in this situation?”

A longtime Stephen King fan, I have skipped his last couple of books because of their length and the mixed reviews, but Full Dark, No Stars is well worth reading. The entire book is only 368 pages, but of course you can just read an individual story or two. Though I bet if you start this book, you won’t stop after one story.
Posted by 3goodrats at 8:16 AM