The Half-Life of Planets 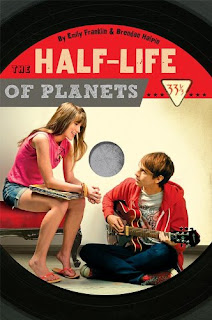 "Slut." This is the note Liana found in her locker one day, and the reason she has decided to give up kissing. She continues to obsess over the note, and her own behavior, every moment that she's not busy in the science lab. But then she becomes distracted by an unusual boy named Hank. Hank has his own obsession - music. He will steer any conversation towards music, no matter what it was originally about. This is what happens when he first meets Liana in the women's bathroom of the hospital after spilling coffee on his lap and rushing through the wrong door. Both are surprised when they strike up a friendship that seems headed towards romance. Liana is torn between her attraction to Hank and her kissing moratorium. Hank, who has Asperger's syndrome, is completely unused to positive attention from girls. There is just no way this is going to go smoothly.

Chapters alternated between Liana and Hank, the two authors assuring distinct voices for each character. While I was sympathetic to Liana and liked her well enough, Hank stood out as the far more interesting character. He was quirky yet charming, embarrassingly awkward but selfless and kind. He always meant well, so even the times he screwed up weren't intentional and it was impossible to be mad at him. Both characters were outcasts in different ways, and watching how they navigated a relationship together was funny and sweet.

There were a few awkward spots in Liana's chapters, which detracted slightly from the story. At one point her parents tried to have a serious conversation with her and she kept interrupting and finishing their sentences. But they didn't correct her, just moved on to another topic, and it felt fake. Later when Liana met up with her mother and learned what they were trying to tell her, she again just diverted the conversation towards her own problems, not asking the obvious follow-up questions to the news. During these scenes I kept picturing her parents sitting quietly like cardboard cutouts while Liana controlled the conversation.

Other than those two scenes, I enjoyed the novel quite a bit. It was a refreshing break from the steady diet of dystopias and the undead that young adult literature provides these days, and I really enjoyed watching a regular, and very sweet, relationship develop between two fairly-normal human teenagers.
Posted by 3goodrats at 9:00 AM