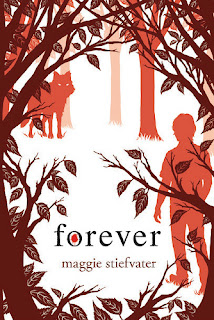 This is the third and final book in the Wolves of Mercy Falls series.  My reviews of the first two books are here and here.

Things are looking ever worse for the Mercy Falls wolves. A young woman is found dead in the woods and this becomes the last straw for Tom Culpepper and the other wolf-haters who soon secure permission to exterminate the wolves.  Meanwhile, our friends Sam, Grace, Cole, and Isabel are hatching a plan to move the wolves to safety. They find an unlikely ally and together try to save the wolves once and for all.

Sam and Grace continue their lovefest now that Grace is a wolf and hiding from her parents. While in human form she is staying with Sam at Beck's house. Because of her limited contact with her parents, I found their relationship easier to endure now that they weren't constantly trying to convince other people of how serious they are.

There is an extra element of danger and risk now that Grace is also a wolf. But Cole continues to work on his scientific experiments to try and overcome whatever it is that controls shifting from one form to another, which he is convinced is something other than temperature. This was never completely clarified for me and was one of many unresolved threads in the story.

I found this book merely ok, mostly because of the lack of resolution. But overall, I found the series pretty good. The audiobooks were a bit uneven as a couple of the readers changed from one book to the next, but that's a minor quibble, and in the case of Sam it was definitely an improvement.

For a young adult series, the pacing was relaxed and the story contained more internal dialogue than usual. Not too much - definitely not enough to be boring - but the storytelling was a slight stylistic departure from many young adult novels. What I liked most were Stiefvater's werewolves. I just liked how it worked in this world, and I liked the pack dynamics, Sam's history, and how that all fit into the larger story. I'm not sure how I got from feeling caught up in Sam and Grace's romance to rolling my eyes at them, but I think that could have been improved in a couple of ways. For one thing, this series took itself slightly too seriously - and I may be biased because I think humor improves pretty much everything. Secondly, I wish it had been wrapped up more in the end. This didn't feel like the last novel in the series, it just felt like a continuation of the middle book. I don't feel like the wolves are safe once and for all, and I don't know how Sam and Grace will continue on their relationship given the states of their wolfishness.

Overall, I thought this series was good, but not great. Did anyone read this and love it? Please tell me what you loved most about it!
Posted by 3goodrats at 3:00 PM