I'm working on what may be the most poorly written pattern ever.

That's probably an exaggeration, yet it's been a while since I've been so flummoxed by what should be a fairly simple set of directions.

This is a top-down raglan baby sweater, with a simple cable running down each side of the front. There's a garter edge and although the "notes" section specifically says to always knit the first and last stitches in the row, those instructions are repeated for most rows, except one, so of course I forgot to knit those and that was the first time I had to rip back.

That's not even the bad part of the pattern though, just a slight inconsistency. The part that I find truly aggravating is the cable pattern. There is no chart, which is unfortunate enough for a visually-oriented person like me, but the written instructions are somewhat maddening. They are thus:

Now. I'm knitting along and every time I get to the cable part I need to hunt through the pattern to find the row I'm on and then follow those instructions. Not only did I not have a good idea of the overall shape of the thing without a chart, but for some reason all this hunting and pecking made me think there were fewer than 18 rows in the repeat so I started the second repeat too early and that's the second time I had to rip back. (I realize it's my fault for not reading through the pattern closely, but honestly I was at a knitting group where I was new and trying to meet new people. My attention was divided. That's why I chose such a "simple" pattern to work on.)

After the second ripping back, I got a piece of graph paper and charted the stupid thing so I had an idea of what it should look like. This is when I realized how simple the cable pattern is. Looking at it on the right side it's always 2 purls, 8 knits, 2 purls except for the two times that you do a cable cross, in rows 4 and 10.

That is all. Look closely at the first and fourth lines of their cable instructions. I actually went online to find out if there was an errata for this pattern, hoping that would explain why they found it necessary to list Row 18 separately when it is the same as the other 6 rows grouped together above.

Despite my setbacks, it's beginning to shape up a little. 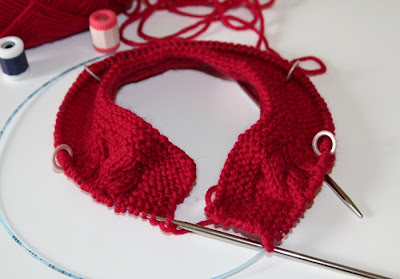 I am probably overthinking this whole thing, and honestly it wouldn't bother me so much, especially for a free pattern, except this pattern is from Interweave Knits. They should know better. Some of the problems I've had are clearly due to my own inattention, but come on IK, at least meet me half way.
Posted by 3goodrats at 1:36 PM