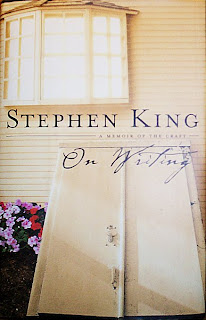 I've heard many great things about this book over the years, but was
finally inspired to pick it up after reading Ann Patchett's The Getaway Car, a short piece about her writing which made me curious about how other writers approach their craft. (Also, I just wanted to read something by King and there were no library copies of 11/22/63 available.) In the book, King describes his early life, how he started writing, his career trajectory, and the accident that almost took his life in the summer of 1999.

Having read many of his novels and short stories over the years, I really loved reading his thoughts about his own writing. The background stories were really interesting, such as the two unpopular girls in high school who inspired the title character in Carrie, but also he wrote a lot about what did and didn't work in his novels. I love that he is so candid about the lesser of his books. Rose Madder and Insomnia are two that he mentioned as being sub-par; I've never read either of them, and now am more likely not to. On the other hand, I'm now interested in Bag of Bones based on his thoughts about writing it successfully.

His advice ranges from the specific to the broad. "I believe the road to hell is paved with adverbs, and I will shout it from the rooftops." King gives examples of poor adverb use as well as other grammatical problems. He also offers advice on creating multi-dimensional minor characters, saying "...in real life we each of us regard ourselves as the main character..." It sounds obvious when he said it, but it hadn't occurred to me before (but then again, I'm not a writer.)

Perhaps his broadest (and I have to think, most helpful) advice is to write with the door closed, but then rewrite with the door open. King always writes his first draft without showing any of it to anybody until it's done. When he goes back to rewrite, that is the time to let other people have a look. For this reason, he isn't fond of writing classes where students weigh in with their opinions early. Everyone will have something different to say, and who do you listen to? According to King, while you're still writing you should just listen to yourself.

His first reader is always his wife Tabitha. One thing about this book that struck me is the depth of his affection for her. Again and again he says how important she is to his writing, and to every aspect of his life for that matter. Maybe it's just because he's known for focusing on the darker aspects of the human psyche, but the importance of his marriage stood out to me as I was reading. It's nice to know that people who have been married for decades can still appreciate each other so much.

I think what makes this book so unique is how open and candid King is about his process, something many writers seem reluctant to reveal. He tells us how many drafts he writes, where he writes, and his schedule for a typical day. Along with the biographical parts of the book, it paints a fairly full picture of an author who I have long admired.
Posted by 3goodrats at 9:24 AM

I actually really enjoyed both Insomnia and Rose Madder. The only King novel I didn't care for was From a Buick 8.

That's good to know! I recently came across a list (which I cannot find now) of all Stephen King's books ranked based on how good they are (or it may have been popularity) and I was surprised where some of the titles fell. Obviously, it is all subjective.