The Elements of Style

The Elements of Style (Illustrated) by Strunk, White, and Kalman (2007) 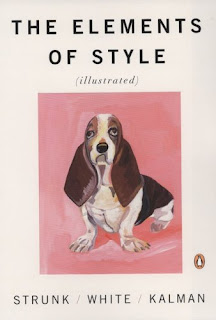 Between all the long and slow-moving novels I've been reading lately, I snuck in a short book about grammar. I read The Elements of Style in high school (or at least referred to it) but only recently discovered this beautiful edition illustrated by Maira Kalman. (You may remember her from Daniel Handler's Why We Broke Up.)

Divided into several sections, the book covers everything from basic grammar and spelling to writing more effectively by using an active voice and placing emphatic words at the end of a sentence. The longest section was "Words and expressions commonly misused," a mostly useful reference guide to misuse. I was surprised to see that Strunk recommends using the word "persons" instead of "people" and says that "prioritize" and "finalize" are "abominations." This may be because the book was originally published in 1959.

Many times while reading I felt validated by Strunk's advice. For instance:
"Dialogue is a total loss unless you indicate who the speaker is. In long dialogue passages containing no attributives, the reader may become lost and be compelled to go back and reread in order to puzzle the thing out."

One of my biggest frustrations with reading contemporary fiction is that authors will not tell me who the hell is speaking. Does this bother anyone else? I don't understand why the simple but helpful "Sally said" or "Tom replied" is so out of fashion. Following dialogue has become almost impossible. Along the same lines, I miss the semi-colon and do not understand why it has fallen out of favor; Strunk would agree, as the semi-colon makes more than one appearance here. In summary, reading The Elements of Style has reminded me that modern fiction is a mess of confusing dialogue and run-on sentences. But I digress.

I should mention the illustrations, which are what induced me to pick up this edition in the first place. Each illustration accompanies a quote from the text, and they are all just wonderful. Sometimes they are quite literal - a picture of an egg beater accompanied by a quote about an egg beater, but just as often the relationship was not as obvious. For instance, the cover art is paired with the quote, "Well, Susan, this is a fine mess you are in." I just loved it.

This is a handy volume for anyone who ever writes anything, and if you're going to pick it up you may as well do yourself a favor and go with this beautifully illustrated edition. And no, it's not lost on me that I've probably broken several of Strunk & White's rules just in writing this review. Knowing is half the battle.
Posted by 3goodrats at 8:43 PM

When I was in college I made some dorky resolution to re-read The Elements of Style once a year (I never kept it, needless to say).

I'm currently reading Reading Lolita in Tehran and I occasionally have trouble figuring who is talking because of unattributed dialogue.