All was going smoothly on my re-knit of the Puff-Sleeved Cardigan peplum until I reached row 17 of the 20-row lace pattern. Suddenly I didn't have the right number of stitches in ANY of the repeats, but I just fudged it by doing a k2tog instead of a k3tog in each repeat. Then on row 19 I saw that each lace repeat begins and ends with a yarnover, but the next row doesn't indicate any special treatment in these areas -such as knitting the first and purling the second, or knitting the second through the back loop - even though you can't knit two yarnovers in a row. I became suspicious. I've made this sweater before. I went on Ravelry and looked at forum posts related to this pattern. I saw a couple from me.

I had forgotten about this.

It's the Peplum of Vexation. 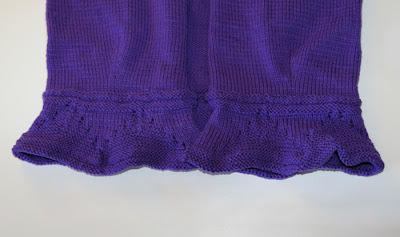 But hey, the peplum is done! Again! 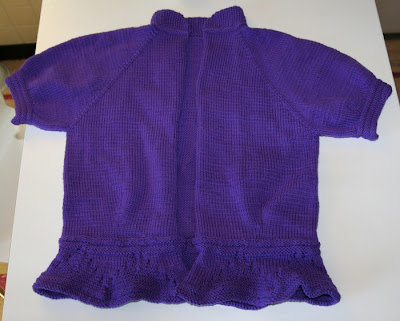 Now, just to make the button bands and sew on the buttons, tasks that I am not at all looking forward to.
Posted by 3goodrats at 6:03 PM