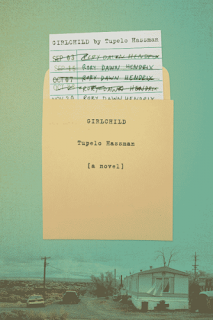 Rory Hendrix lives in a trailer park with her single mother. It is a hopeless place, and Rory is determined to get out and make a better life for herself. She takes guidance from the Girl Scout Handbook, which she checked out of her school library so many times that the librarian finally withdrew it and sold it to her for 10 cents. Her story is told through a hodgepodge of memories, social work reports, word problems, fake Girl Scout badge guidelines, a couple of completely blacked out chapters, and a cocktail recipe.

The story is one I've heard before: a young girl living a hardscrabble life riddled with abuse and broken dreams. What sets this novel apart is how that story is told. Although there are some events that happen in a particular order, it's more like a picture of what her life is like than a story in the traditional sense. Frequently I don't like that sort of novel, but this flowed well and the very short chapters made it quick to read, and I really enjoyed the untraditional elements. They were all a little satirical, like the cocktail recipe that calls for "equal parts sweat and heedless disregard" and the Girl Scout badge for puberty, which includes this required activity:

"Forget to change your pad long enough to allow a silver-dollar-sized spot of blood to leak through to the seat of your pants. Intermediate: Have a boy notice the spot before you do. Advanced: Have the boy who notices it be the one you secretly have a crush on (or his best friend)."

But the novel doesn't rely on gimmicks; these elements only enhance Hassman's writing which is spare and concise, yet clever. Describing Rory's hometown, she writes: "Tiptoe up behind Tahoe and put a hand over its mouth. Bear down slowly until it doesn't fight the developers pawing its land. That's Reno." There are many passages worth savoring and I found myself re-reading many of them as I went along.

Although I didn't love the novel the way many people do, I really admire Rory's ambition, and her dedication to Girl Scouting even though, or maybe especially because, her town had no troop and she was doing it all on her own. That is what I liked the most about the novel - it made me want to dig up my old Girl Scout Handbook and start working on the badges I didn't earn the first time around.
Posted by 3goodrats at 9:14 AM