The Shuttle by Frances Hodgson Burnett (1907) 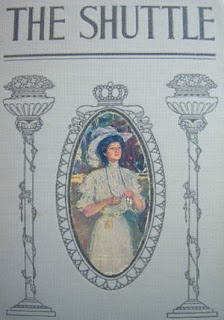 I knew Burnett only as the author of The Secret Garden and The Little Princess, but I didn't realize that she even wrote adult novels until I read this review of The Shuttle. The title of the novel is a reference to the back and forth motion of ships between America and England (much like the back and forth motion of a shuttle on a loom), bringing the two nations ever closer together. America is treated as a progressive and ambitious nation full of people with new ideas, suggesting that England lags behind. It had lately become a trend for wealthy American women to marry English men and one such story forms the basis for the novel.

The Vanderpoel family is incredibly rich and live in New York. One of the daughters marries an Englishman, Sir Nigel Anstruthers, and moves with him to England. Rosalie writes home at first, but her communication becomes more sparse until her family fears that she has forgotten them. But her much younger sister Bettina, who remembers her own strong dislike for Sir Nigel as a child, vows to visit Rosalie as soon as she is old enough, and so she does.

Twelve years after the marriage, Bettina arrives at Stornham Court unannounced and finds Rosalie a pale shadow of what she once was, dressed in rags and living in a once-grand house now fallen to ruin. Her husband is off in Europe somewhere spending all of Rosy's money while she is left alone with her hunchback son, Ughtred. Bettina, ever smart and industrious, begins to set things right on the estate and begins to rebuild Rosy's confidence from the battering it took from horrible Sir Nigel. Meanwhile, Betty develops a growing affection for the mysterious Lord Mount Dunsten, a local outcast who lives at a neighboring estate.

Sir Nigel Anstruthers is probably the most despicable character I've encountered in quite a while, and I must admit how much I enjoyed hating him! He was completely backwards in his notions about women and their rightful place, plus he was a little crazy and had an undefined illness that I suspect was syphilis. He was manipulative, behaving cruelly towards Rosy but twisting everything to make it look like she is just hysterical. Luckily, Betty is too smart to buy into it and doesn't believe him for a moment.

Betty Vanderpoel, however, was just one of the best female characters I've read in quite a while. Not only intelligent and strong, she was insightful and caring and completely willing to help out everyone she met with her loads and loads of money. It was as though a fairy godmother has descended on their village, bestowing goodness and hope upon its residents. She has good judgment, keeps her cool under pressure, and more than once was told that she "should have been a man" because of her competence.

I won't lie - this book is over 500 pages and took me quite a while to get through. But it's really a wonderful story, and well told. The Shuttle is also a great feminist novel, and I'm surprised it's not considered a classic and read more widely.
Posted by 3goodrats at 10:14 AM

When most people think 'Victorian lit' they think stuffiness or quaintness. There are a lot more nineteenth feminist (or otherwise subversive novels) than many people know.

Regarding American women marrying wealthy English men, you probably knew this already, but Winston Churchill's mother was the daughter of a New York stockbroker.