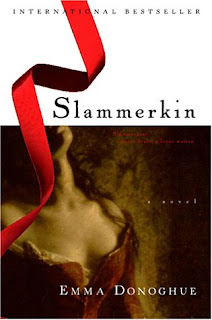 In 18th century London, a girl on her own is hard pressed to achieve her dreams of upward mobility. But Mary Saunders maintained her ambition after being kicked out of her house for being pregnant, and even after working as a prostitute to earn enough money to keep herself fed and drunk. Mary wasn't educated or patient, nor did she make especially good life choices, but her liveliness and resilience made for a captivating character.

Based on an actual case about which few facts survive, Emma Donoghue (author of Room) created a well-researched and richly detailed historical novel with an amazing sense of time and place. This is exactly what I love about historical fiction: the clear portrait of what everyday life was like. Because of Mary's interest in fashion, there were many descriptions of the tawdry dresses worn by the prostitutes as well as the lush gowns of the upper classes. Daily tasks, meals, and living quarters were also vividly illustrated throughout. As unpleasant a time and place in which this was to live (especially if you are Mary Saunders), I couldn't get enough of these descriptions.

Mary was a fascinating character, and while I didn't exactly like her, I was sympathetic to the conditions of her life. When she made bad choices - which was frequently - it was easy to understand why she did so. She wanted more for herself, and though she was sometimes briefly tempted by the promise of a quiet steady life, her ambitions were greater and her circumstances desperate. Unfortunately, in that place and time there were few options for a girl in her station, and the kind of life she wanted would be nearly unattainable. Mary was not the only character stuck in a life she didn't want; for a while she shared quarters with a slave, Abi, who made even Mary seem upwardly mobile in comparison. Freedom was a predominant theme in this novel (in fact, few of the characters were really free) and in that way it reminded me of Donoghue's very different novel, Room. I'm curious if this theme appears in any of her other work.

Much like with Tipping the Velvet, I've been wanting to read Slammerkin for several years before finally picking it up last week. That's not the only similarity to the Sarah Waters novel either - this look at London's underbelly was every bit as lush, detailed, and satisfying. I'm so glad I finally read it!
Posted by 3goodrats at 8:06 AM