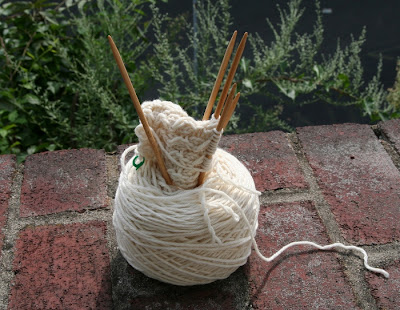 I almost didn't have anything to post about today, but then yesterday I was suddenly inspired to cast on for the Jack-in-the-Box Mittens from Robin Melanson's book Knitting New Mittens and Gloves. I love looking at all the lovely pictures in this book, but this is my first project from it.

The yarn is some Cascade 220 that I bought sometime last winter when I decided I needed to make mittens and a hat to go with this scarf. I have no idea why I would make a scarf without also buying coordinating yarn for the other accessories I'd be wearing with it, but I've done that sort of thing over and over again. I also bought some bulky yarn in the same color for a hat, and hopefully I'll be able to wear it all together this coming winter.

For reasons I cannot explain, I forewent my usual magic loop method and actually began the project on double pointed needles. You may be aware that my hatred of dpn's burns with the heat of a thousand suns, so I do not know what possessed me to use them. (What next? Will I join a religious cult? Apparently anything is possible.) I don't even have both the sizes required, so I didn't bother starting with a smaller needle size. I find this isn't usually necessary anyhow, though only time will tell if that's the case with this pattern.

After the swearing that accompanies casting on and working the first row on double points, I settled into the project with moderate success. As always, it was extremely awkward and every now and then I realized I was using only 4 needles instead of all 5. This is why I prefer working with only one - or at the very most, two - needles. 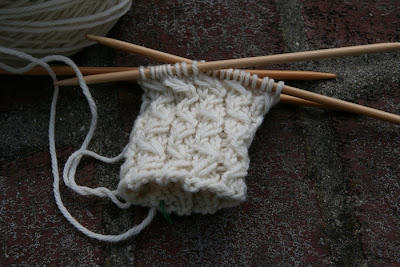 The cuff is made with an unusual pattern, but I think I like it. I'm quite happy to have a quick little project on the needles.
Posted by 3goodrats at 4:32 PM