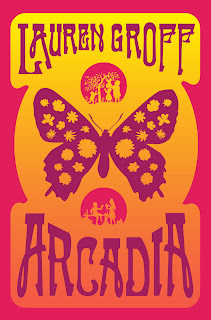 In the early 1970s in western New York, a group of idealists form a commune on the grounds of an old mansion called Arcadia House. Among the early arrivers are Abe and Hannah, and it is their little son Bit who is the center of our story. Bit grows up in Arcadia, witnessing its rise and eventual fall, before he is finally forced out into the real world as a teenager. A little over half the book takes place in Arcadia before jumping ahead about twenty years, where we visit a fairly unhappy Bit. Then again it jumps forward and is suddenly a dystopia.

Lauren Groff's writing can be quite exquisite. As I began reading I was charmed by her beautiful sentences and apt turns of phrase. But that can only take you so far, and as a storyteller she falls short. The life cycle of the commune is captured well, and I really enjoyed the atmosphere and characters. Then when the story jumps ahead to Bit's life, I felt robbed of something that could have been fascinating - his introduction to the world outside of Arcadia. How integral this must be to his development as a person, and we missed it! And the part of his life we skipped to is, frankly, pretty boring. There was a doomed romance that I felt it difficult to care about because I don't know why he loved this person in the first place. When the story skipped ahead again, I wanted to just be put out of my misery. Suddenly Bit is in a world that seemed to be entering some sort of apocalyptic time, and I wasn't sure what kind of book Groff was writing. It's like she was trying to put everything she could think of into one novel. Perhaps she was trying to contrast the utopia of Arcadia with the dystopia of the future world, but it didn't quite work.

Unfortunately, I could not connect at all with the main character, Bit. I simply didn't feel like I knew him at all. The Guardian review says: "The requited maternal ecstasy the author feels for Bit, combined with turgid storytelling results in a novel that could be a one-page love poem, and in that sense feels 288 pages too long." That is spot on - Groff loves Bit, but just as I can't be convinced of Bit's love for his ex-wife, so I don't see what Groff finds so compelling in this character and that may be the biggest failing of the novel.

Arcadia was released to rave reviews, and those mean little to me, but I do pay attention to reviews of my friends. On Goodreads, almost everyone I know gave this book 5 stars, which was enough to convince me to pick it for the library book group. Now I'm struggling to understand what everyone loves about it, which is why I'm reading so many reviews. On the bright side, I stand by my book group choice, because there are a lot of things about this novel I can't wait to discuss with others. I hope some of them loved it, and can explain why.
Posted by 3goodrats at 8:59 AM