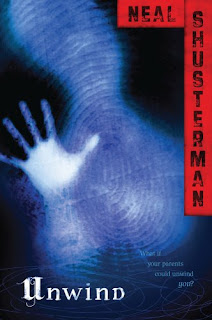 The Second Civil War was fought over reproductive rights, and after it was over both sides agreed to a compromise. Life was to be considered sacred from conception until the age of thirteen. At this point, parents could choose to retroactively terminate the pregnancy by having their child "unwound" and all of his or her body parts donated. It is into this world that Connor, Risa, and Lev were born. Connor has started too many fights and has been too much trouble to his parents. Risa is a ward of the state and the home has gotten too full. Lev has known from birth that he would be unwound, because he's a tithe from his parents to the church. When one of them decides to go AWOL, all three are thrown together to face their futures.

The premise of the novel is a bit hard to swallow, but after hearing my coworker talk about it at a YA Crossover Booktalk that we did at the library, I had to try it. Maybe certain aspects of their society aren't fleshed out enough, and the motivations of the parents are difficult to understand, but that was more than made up for by the fast-paced plot, likeable characters, and one especially disturbing scene that was awesome and nightmarish at the same time. (Actually, I think it may have been the mention of this scene that really made me want to read it, and it did not disappoint.) In addition to the main characters were Roland, a terrifying bully, and CyFi, a teenager with part of an unwind's brain, and let me tell you THAT is not something that goes as smoothly as everyone in this world would have you believe. A possibly-trustworthy adult character, The Admiral, has a great back story that is revealed slowly near the end and provides some much-needed hope for humanity.

The plot includes strangers forging alliances in a society that breeds mistrust, friendship and betrayal, fear of authority, and some screwed up relationships between generations. Though the Bill of Life is supposed to make life more scared, in fact it just cheapens it. Unwinding isn't considered dying, but living in a divided state and most people refuse to discuss what that means, and what the process of unwinding actually involves. Are the unwound kids still alive in some way? You'll have to read the book to find out.

Just recently I remarked to someone that I was getting a little burnt out on dystopias, but apparently that's not the case. I'm also very happy to say that even though this is a planned trilogy (isn't everything?), Unwind works very well as a standalone. If you like that genre at all, I think it's a very good choice!
Posted by 3goodrats at 10:13 AM