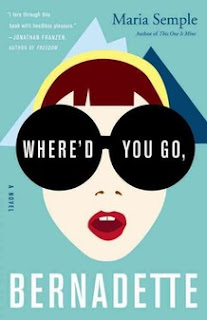 When Bee brings home a perfect report card, her parents are thrilled. Then she reminds them she's earned whatever she wants as a present, and they become less thrilled when she requests a family trip to Antarctica. This sends her reclusive and emotionally precarious mother, Bernadette, into a manic state which culminates in her sudden disappearance just days before their scheduled trip. Told through emails, letters, official documents and some first-hand narration from Bee, the novel recounts Bernadette's strange behaviors and the events - past and present - that all lead up to her mysterious disappearance.

Bernadette Fox was once an architect who won prestigious awards for her work, but ended up as a stay-at-home mom in Seattle. She hates Seattle, the state of Idaho, Canada, and the neighboring suburban women she refers to as "gnats." Reluctant to leave her house, she hires a virtual assistant from India named Manjula to handle all her errands. Still, she manages to run over her neighbor's foot with her car, cause a mudslide that destroys the woman's home, and get involved in an international conspiracy.

Bee is a believable teenager, precocious yet naive. Her choice of vacation is a direct result of studying Antarctica in school, voraciously reading up on the continent and the many expeditions there throughout history. When she gets ideas in her head they stubbornly refuse to leave until she's satisfied; hence, the Antarctic trip and her later search for her mother even after authorities tell her all hope is lost. Her enthusiasm is infectious. Even after everything that happened (and despite how much I loathe extreme cold), I sorta want to visit Antarctica too.

Does it all sound a bit wacky? It is - this is fast ride to crazyville. As I learned more about some of the "gnats" in the neighborhood, especially Audrey Griffin, I couldn't help but sympathize with Bernadette. The farther into the book I got, the less certain I became of who was actually sane and who wasn't, but I still enjoyed every moment of it. It reads partly like chick lit, partly like a young adult book, retaining its fast-paced hilarity throughout. Fun, fresh, and clever, Where'd You Go, Bernadette has been flying off the shelves at bookstores and libraries and now I can see why. Burnt out on dystopias and the zombie apocalypse? This might be your best remedy.
Posted by 3goodrats at 9:36 AM