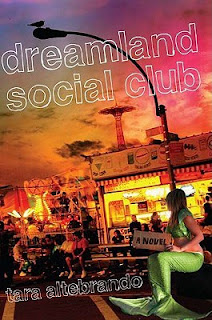 After her grandfather's death, Jane moves with her brother and father to the house on Coney Island where her mother grew up. They've never been here before, nor did they know their grandfather. Jane's mother always intended to bring her kids back and show them Coney Island, but died before she got the chance. Now Jane tries to fit in with a motley group of fellow students who could start their own sideshow, while trying to make sense of her mother's affection for a place that has clearly seen better days.

The best part of this book is the setting - I know nothing about Coney Island, so it was all new to me. Most of the rides Jane's mother told her about are gone and the town is pretty run down. Jane meets interesting characters at her school, like a goth dwarf named Babette and a boy with no legs who goes by H.T. (Half There), as well as a bearded girl, a giant, and - most intriguingly of all - a tattooed boy named Leo who Jane instantly crushes on. But Jane is the real outcast, the other kids slow to accept her, especially when they find out that her dad may be in cahoots with a developer who wants to make drastic changes to the community they all love so much.

Although her mother had already been dead for several years, Jane was obviously not over it. Coming to Coney and learning more about her mother and where she grew up was rather cathartic for her. Suddenly, a lot of the games her mother used to play with her began to make more sense as Jane realized they were based on amusement park rides. We get a fragmented view of Jane's mother, who comes across as completely freaking obsessed with Coney and the amusement park rides, but obviously that's just what Jane remembers. Throughout the book she gets to know her mother more and more, as she also becomes more at home in this strange new place where she is living.

If you've ever been new in town, or lived in a community dealing with change and development, this book will resonate with you. Throw in some colorful characters and a little bit of romance, and you've got a winner. I initially found some of the accents a bit grating in the audio version (and I don't know if that's the narrator or just the accents), but soon got used to them and now I want to go around saying "Hey, Looky-lou!" to everyone I see. Either audio or print would be a great choice with this one - whichever you prefer, I recommend giving it a try.
Posted by 3goodrats at 1:18 PM