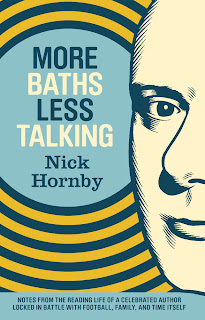 This is Hornby's fourth collection of essays from his books column in The Believer. As in previous installments, each chapter represents a month (sometimes two) and begins by listing "Books Bought" and "Books Read," followed by an essay on that month's reading.

Hornby's taste is eclectic, but no matter what kind of book he's talking about, his commentary is sure to be entertaining. Even tomes like Austerity Britain, his opener, are fodder for interesting discussion in his hands. From dense nonfiction to children's books, every reader will see something that sparks his or her interest. There are also plenty that I'm glad he read so I don't have to.

It's nice to read his thoughts on books I've already read (like Tinkers by Paul Harding and The Imperfectionists by Tom Rachman), as well as books I keep meaning to get to - Ten Thousand Saints by Eleanor Henderson or The Fear Index by Robert Harris. And if a British person can highly recommend Game Change, a book about the 2008 U.S. Presidential election, then surely I should finally get around to reading that as well.

One of my favorite things about Nick Hornby is how unpretentious he is. His tastes run the gamut from literary award-winners to thrillers and he finds something of value in pretty much everything he picks up. Plus, he comes clean about being too distracted to read anything during the World Cup.

As much as I love reading about books, it almost doesn't matter which ones he's talking about because the real value of these essays is Hornby's writing. More than anything, it made me want to read more of his books.
Posted by 3goodrats at 8:56 AM