A Study in Seduction 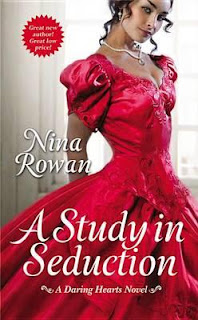 Young mathematician Lydia Kellaway has lost many things - her parents, her virtue, and now her mother's locket, sold to a pawn shop and subsequently purchased by the handsome yet infuriating Lord Northwood. Lydia is determined to win the locket back, but at what cost?

Of course, a romance blossoms between Lydia and Alexander and it is fraught with obstacles. Alexander's family is still getting over the scandal of his mother running off with a Russian and his parents' resulting divorce. Lydia....well. She has dark secrets she cannot reveal to anyone, lest she cast scandal over her own family.

I first heard of this novel on the Smart Bitches Trashy Books website and its accompanying podcast Dear Bitches Smart Authors. The premise of the book sounded unusual, and I was further interested by the disagreement between the two podcast hosts about whether or not the book was any good.

Alas, I did not find this novel especially compelling, and there were some frustrating aspects. First of all, there is a huge reveal near the end and I saw it coming a mile away. I guessed from very early in the book, and I am not an observant reader who typically anticipates these things. I am oblivious, and am pretty much ALWAYS surprised when authors want me to be.

Furthermore, when Alexander discovers this shameful truth, he gets over it remarkably easily. Normally, I'd chalk it up to love but in this case the hero of the story has a pretty fresh scandal in his own family and those wounds are still a bit fresh. Would he be so quick to accept the possibility of another scandal? I find it hard to believe.

As for our heroine, she was likable enough until fairly late in the book at which point she began furthering the plot by continuing to insist on the likelihood of a scandal after that possibility had been eliminated. I hate when characters do this - they continue to keep secrets when it's no longer necessary or stubbornly cling to things that are untrue. So annoying! In this case, things were wrapped up pretty well and she just continued to draw out the drama in a way that was completely unnecessary. There is no reason for Lydia to continue in this vein except to draw the book out another couple of chapters.

The math aspect of story was a little lame. I realize it's a romance novel and not an academic treatise, but some of her demonstrations were just parlor tricks. But I thought she was fairly convincing as someone who enjoyed math immensely, and found comfort in its rules and structures (an aspect of the story about which the podcast ladies disagreed).

Altogether, it was neither wonderful nor terrible. I liked the premise, and mostly liked the primary characters (except for Lydia's stubbornness). I found the relationship between Alexander and Lydia compelling and as full of tension as it should be. Still, it was just ok. I probably won't make a point to read the next novel in the series.
Posted by 3goodrats at 12:54 PM