History of a Pleasure Seeker

History of a Pleasure Seeker by Richard Mason (2012) 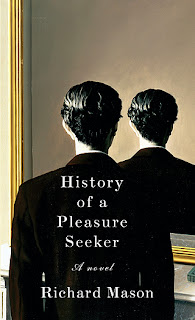 Amsterdam, 1907. Piet Barol has left his impoverished life with his father to apply for a job as a tutor for a wealthy family. The opulent lives of the rich appeal to Piet and he fits in easily with this family, thanks to preparation from his mother when he was young. Seamlessly, Piet navigates this new world, charming the family and seducing his young charge's mother. But not everything is easy - his student refuses to leave the house, and submits himself to strenuous rituals under imagined forces that drive his strange compulsions. His mother Jacobina hasn't been touched by her husband since her son was born, and the couple are unable to communicate about their absence of affection. The daughters are suspicious of Piet, and the household staff a mixed bag of friendly and predatory.

I couldn't help but picture Piet as the gay footman from Downton Abbey because of his deception and sense of entitlement, but I liked him in spite of it because he was mostly harmless and had a conscience that nagged him, if only occasionally.

Speaking of Downton, this novel appealed to my sensibilities in the same way as those great costume dramas like Upstairs, Downstairs and Pride & Prejudice. Indeed, there was a split here between the family and staff, with Piet lodged comfortably between them. He wasn't quite equal with the family, but was still socially above the help, which made it much easier to insinuate himself into the family's lives. I enjoyed his trajectory, and liked him enough to spend the whole novel with him, but not enough to feel badly when things went wrong. It was his own fault, after all.
Posted by 3goodrats at 10:04 AM