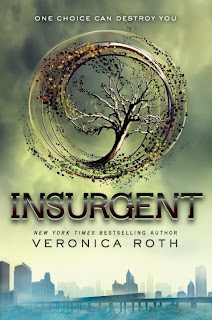 I recently reviewed Divergent, and couldn't wait to land my hands on a copy of the sequel. Be warned - there are spoilers ahead!

When Divergent ended, Tris was newly initiated into the Dauntless faction, but the event was marked by violence and horror that left the factions in conflict with one another. In this second volume, Tris is still reeling from being forced to kill a friend but she must keep going in an uncertain climate in which war seems inevitable. Erudite is using its knowledge to control other factions, and they seem to be looking for information held by Abnegation. Meanwhile, the factionless have grown in number enough to be a force in itself.

I'll admit I didn't spent a lot of huge chunks of time reading so it could be partly my fault for not focusing, but I think Insurgent suffered a bit from Second Book Syndrome. The first book in a trilogy introduces us to a world that is new and exciting, then the second book just tries to bridge a gap between the exciting first book and the climactic resolution of the third book. It's hard to fill that space with something that can compare. But this book had a few things going for it. We learned little about the Amity faction in the first book, but here they played a much larger role, as did Candor and the factionless. There's also a big (though not shocking) reveal at the end that makes me very curious about the third book.

Tris struggled with a lot of her relationships in this story - her budding romance with Tobias, her friendship with Christina, even her relationship with her brother Caleb became complicated by the events going on around them. She didn't know if she should trust Peter, who tried to kill her once before, or Marcus, Tobias's abusive father who seemed to hold the key to Abnegation's secrets. She had to decide for herself who she could rely on, and then face the consequences.

I appreciate that these books don't end on huge cliff-hangers. I hate reaching the end of the book with little or no resolution and though it came late here, it was fairly satisfying. Based on the ending, I suspect where the third (and final?) book will go. It's supposed to be released sometime in 2013, but I don't know when. Hopefully by then I'll still remember where the story left off.
Posted by 3goodrats at 8:58 AM