The Power of Habit

The Power of Habit: Why We Do What We Do in Life and Business by Charles Duhigg (2012) 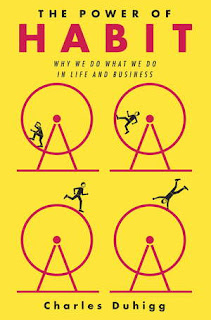 This surprisingly popular exploration of how we form and break habits doesn't set out to help you quit smoking or stay on track with your exercise regimen, but it contains a fascinating trove of information that - among other things - may provide some insight into why we do the things we do.

Duhigg uses a "habit loop" framework to illustrate our behaviors and carries this throughout his discussions of individuals, organizations and society. His terminology can sometimes feel like a stretch - I'm not sure I'd consider friendship a "habit" - but mostly it's a useful way of understanding complicated concepts. 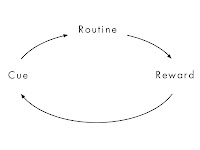 The real meat of the book are the stories about the habits of people like Eugene Pauly, who lost all ability to form new memories but could still develop new habits, and Lisa Allen whose entire life changed because she took a trip to Cairo. Less inspiring (to those of us cynical about corporate influence) but no less interesting are stories about the people who successfully sold products like Febreze by creating new habits among consumers. I was especially interested in the chapter "How Target Knows What You Want Before You Do," in which researchers at Target learned how to identify pregnant customers before they told anyone so the store could target the appropriate marketing to them before other companies did. If you want to feel completely paranoid about ever using a rewards card- or hell, a credit card- pay close attention to this chapter.

Other stories were about Michael Phelps, AA, the Montgomery Bus Boycott, Starbucks, football coach Tony Dungy, the Outkast song "Hey Ya!" and Rick Warren's church - they are all over the place and sometimes a little hard to tie to the main theme, but still interesting. Duhigg's definition of habit is pretty broad, but still useful in the context.

The appendix is sort of a "how-to" guide regarding breaking bad habits. The example is his own habit of buying and eating a chocolate chip cookie every afternoon. He talked about the cues, the routine, the reward and identified other behaviors that would satisfy the same urge. It's a helpful exercise, though in my case mostly made me crave a chocolate chip cookie. (But then again, what doesn't?)

Other things I liked about this book: there's an index and extensive notes (the last 90 pages). I like when authors cite their sources and Duhigg is very conscientious about notes. He includes when there was conflicting information from his sources and when spokespeople (like for Target) refused to talk to him.   I wish I had the time to read through all the notes but I'm a stickler about getting books back to the library on time.

Fascinating on its own, The Power of Habit was also a great complement to other books about behavior that I've read, such as Mindless Eating by Brian Wansink and Do One Thing Different by Bill O'Hanlon which also emphasize the importance (and danger) of habits.

This would actually be a great book group pick. There's a lot to discuss and much more I kind of want to say, but I'll have to stop here. I need to go get a cookie.
Posted by 3goodrats at 7:05 PM