I finished my Jack-in-the-Box Mittens over a week ago but didn't get a chance to take photos what with Thanksgiving and whatnot. I actually took the mittens and camera to Maine with me thinking that I'd take photos there, but I don't know who I think I was kidding. Anyhow, here they are. 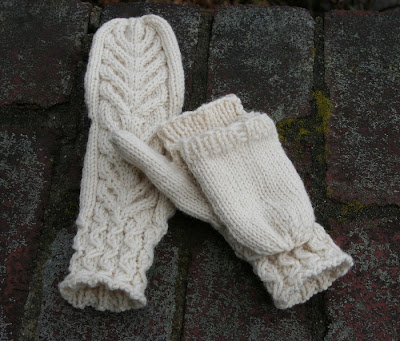 Afterward I realized that the thumbs are obscured. Sorry. Someday I'll get the hang of this photography thing. Or at least won't be too lazy to retake photos. But that is the back of the flipped open one. Here's the front. 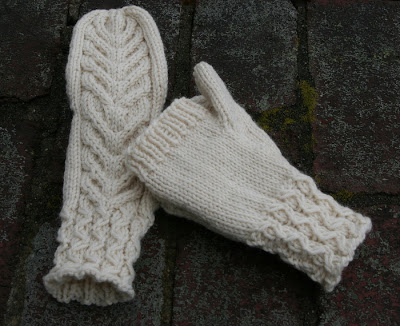 And a close up of what the opening looks like. 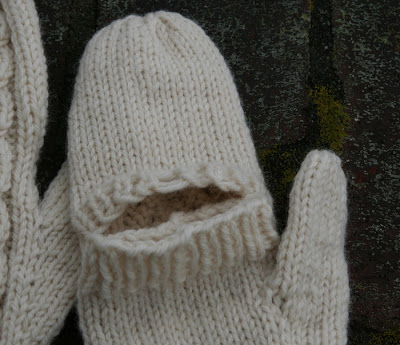 Here you can see the opening where your hand comes out of the bottom part, and the flip-top which, when closed, overlaps a bit with the bottom to keep everything snug. If you button it.

I had grand plans to go out yesterday for buttons but it was snowing, and though it looked mildly festive from inside it was actually rather unpleasant. But I scrounged around in my card catalog and found these buttons: 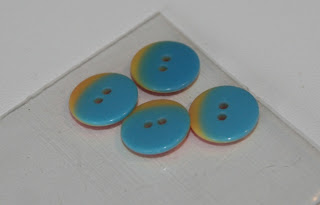 Those are actually the backs - the fronts are red/orange. These mittens are attended to go with a bluish scarf and these buttons may work. I can't really think of what color would be perfect - recently I've tended to want buttons that just completely blend in with the yarn, but that's rather boring, isn't it? These might be a little small but I'm sure I can tighten those already-messy button holes.

Next, according to my plan, is a hat to match these mittens. (Why do I keep wanting to type "kittens"?) Anyhow, hats have becoming quite vexing to me in recent years for some mystifying reason. They rarely come out right anymore, and now I'm stuck on just choosing a pattern. Ideal would be a hat with the same cable pattern as the mittens but I don't think that exists and I'm not about to try and figure out hat decreases in a complicated cable pattern. So I'll likely do something rather plain-ish.

In the meantime, next week I'll have an update on my Livingstone Cardigan. I bet you just can't wait.

This one is pretty close http://www.ravelry.com/patterns/library/antler-hat

Oh, that's pretty nice! The yarn I have is bulky, but it might be worth it to go back for some more worsted.