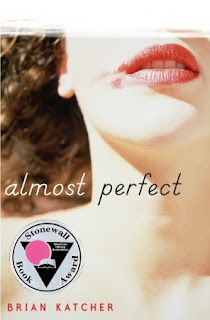 I've just read this novel for the second time, for my Not-So-Young Adult book group at work. Since I've already reviewed it I won't repeat myself, but will just add some thoughts.

One of my favorite aspects of this book has always been how the main character, Logan, dealt with Sage's secret. When he first learned the truth he completely freaked out, said terrible things, and high-tailed away from her as fast as possible. Eventually the better aspects of his nature came though, but he continued to struggle. Logan is a product of the small mid-western town where he grew up, and of our society as a whole, in which transgendered people are still pretty far outside of what most people consider the norm. Katcher is just brilliant at capturing the struggles of teens dealing with their conflicting feelings about other people (see also: Playing With Matches). His characters are incredibly genuine, and easy to sympathise with in all their imperfections and angst.

A couple book group attendees were skeptical that such a story would take place, because surely EVERY town has a PFLAG group these days, right? When one grows up in arguably the most liberal part of the nation, I suppose stories like these can be hard to believe, but I grew up in a very small rural town much like the Boyer, Missouri of the novel and I found it all completely believable. And every day I feel grateful that I live in the veritable utopia of eastern Massachusetts now.

It may seem like a strange choice for Sage's family to move to such a place when an urban setting would have provided the anonymity they wanted, as well as the resources to help the whole family deal better with Sage's transition. But growing up where I did, I remembered being surprised when gay people moved to my town only to be whispered about behind their backs and sometimes shunned. Why ever would you do that to yourself? Well, you would do it if you are a small town person who doesn't like cities much, and I think that's the case with Sage's family.

Almost Perfect remains true to its realism throughout, Logan consistently screwing up and seeming to learn from his mistakes, then screwing up all over again, as teenagers do. It's not a happily-ever-after book either and I think if it had been, it would have been a bit harder to swallow. But it's also not hopeless or depressing, and Logan has clearly been left profoundly changed for the better.

This has become longer than my original short review, but it's an unusual book that deserves attention and discussion, and it remains - in my eyes at least - one of the best YA books out there. I'm glad I read it again and had the opportunity to discuss it with a group. If you haven't read it already, I highly recommend it.
Posted by 3goodrats at 9:49 AM