My Life in France

My Life in France by Julia Child with Alex Prud'homme (2006) 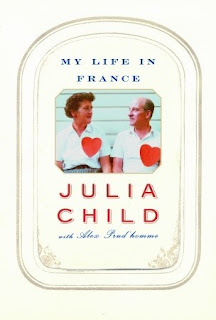 This memoir, co-written by Julia Child and her husband's grandnephew, focuses on the years during which Julia and Paul lived in France. Paul worked for the USIS (United States Information Service) and was fortunate enough to be assigned to a job at the US Embassy in Paris. The couple fell in love with Paris, especially the food. It was here that Julia's lifelong passion for food and cooking was kindled. She ate as much as possible and learned how to cook as much as she could, studying at the Cordon Bleu in order to improve her technique. She became involved with two women who were trying to write a cookbook and the three collaborated on this huge project, which was eventually published as Mastering the Art of French Cooking. By then, Julia was back in the United States becoming a tv celebrity through her show The French Chef.

Julia approached everything in life with gusto, not just food. She threw herself into her projects, absorbed everything around her in France, and the other countries in which she lived. Even when she was forced to leave Paris for Plittersdorf, Germany - which she viewed as the land of Nazis and concentration camps - she still learned as much German as possible and exclaimed at how fantastic the beer was. She was chagrined that the other Americans with whom she was acquainted were not interested in German culture and didn't bother to learn the language. She, meanwhile, made the most of her situation, experimenting with the fresh sausages and local game she found in the shops.

She was also completely unflappable. If something went wrong during a cooking demonstration or other project she just figured out a solution and went on. When Julia and Simca (one of the cookbook co-authors) were to host a luncheon that would be covered in McCall's, Simca decided at the last minute to go out of town for the day. Julia just reworked the menu to make it more manageable alone and went on as planned. In life, as in cooking, she didn't expect everything to go perfectly and was always a good sport about it. Her healthy sense of humor didn't hurt either.

The bulk of the story was set in an interesting period. Though far away in Europe, Julia and Paul weren't completely insulated from the American political climate. Julia's father was a staunch conservative, making their relationship quite strained. But more worrying was Senator McCarthy, who at one point targeted Paul Child for investigation. It came to nothing, but made them both nervous and was a great inconvenience.

Her descriptions of France made me want to visit so badly and eat everything she described, although much of it I really wouldn't actually want to eat (there was a lot of foie gras in this book.) But I enjoyed experiencing it all vicariously through her descriptions and the many black-and-white photos throughout the book. I've never been terribly interested in Julia Child, but in this memoir I found her inspiring, not just her cooking but her entire attitude and approach towards life.
Posted by 3goodrats at 9:50 AM

She was indeed a remarkable woman.