Before I Go To Sleep

Before I Go To Sleep by S.J. Watson (2011), narrated by Orlagh Cassidy 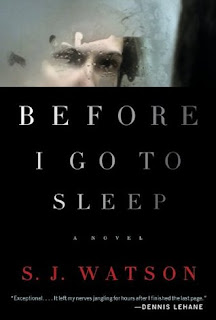 Christine woke up this morning and didn't recognize the room around her. She didn't recognize the man sleeping next to her. When she went into the bathroom and looked in the mirror, she was shocked to look 20 years older than she expected. Her husband then explained that she had amnesia from an accident years before and was unable to form new memories. She could remember the events of the day up until she went to sleep at night. Every morning she woke up having forgot it all again.

The day got stranger. After Ben went to work, Christine received a phone call from someone called Dr. Nash who said they met in secret; he wanted to help her improve her memory but she didn't want her husband to know. Suspicious, she agreed to see him and he handed her a journal - the journal she had apparently been keeping for several weeks. On the first page it said "DO NOT TRUST BEN." Christine spends the rest of her day reading her diary, unraveling the mystery of her life. The journal makes up the bulk of the novel, only returning to present day at the end, by which time everything has changed.

The premise of the story is intriguing enough, but the storytelling takes it to new heights. Each mystery unfolds slowly, sometimes in a completely misleading direction, as Christine reads through her journal entries, each one the story of a day in which she woke up knowing nothing about her present situation and would start by reading the journal so far. Reading through all the entries together, she learned more and more of her story until she was finally able to put it all together and make some sense of her life. But it is only back in the present day, when she finished reading the whole journal, that the final reckoning occurs. Watson expertly conveys the sense of confusion and disorientation Christine feels throughout the novel. I always love an unreliable narrator and this was the best kind because she wasn't deliberately hiding anything. She knew no more than I did which made me feel that much closer to her and her story.

Coincidentally, this audiobook was narrated by the same person as the last book I listened to, Where We Belong. Orlagh Cassidy has quickly become my favorite narrator and the most awesome thing about this was she was speaking in a British accent again, in what I can only think of as her Piano Teacher voice. It's so satisfying to have recaptured the experience of listening to that book - it was a very different story, but there's something atmospheric about the way she reads and I just can't get enough of it. I have a feeling I like this story more having listened to the audio than I would have if I had read the print version. Either way, I highly recommend this compelling novel.
Posted by 3goodrats at 4:18 PM