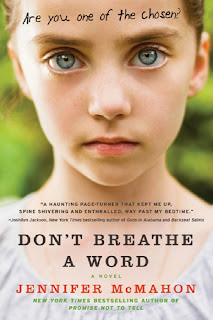 Fifteen years ago, a little girl named Lisa was convinced there were fairies living in the woods nearby. One day she ran away into the woods to meet the king of the fairies and never came back. Now, her brother Sam's girlfriend received a mysterious phone call and they wonder if Lisa has come back. But everyone from the past who is suddenly showing up seems to be hiding something. Who is this mysterious fairy king that everyone is so afraid of? And what really happened to Lisa?

I don't even know where to start with this. I guess by admitting that I never should have picked up this book in the first place. I knew from the beginning that this book was about either a) fairies, or b) adults who believe in fairies. Neither of those was likely to end well. I've read books with far-out supernatural elements that I've liked but in this case, once I started reading I didn't know if I was looking for a real-world explanation or if I needed to suspend my disbelief for an actual fairy story. It was just not a good choice for me, so take this all with a grain of salt.

Even aside from the fairy aspects, the story rather fell flat for me. It was told primarily from Sam's girlfriend Phoebe's point of view, alternated with flashbacks from Lisa's story fifteen years ago. Lisa was just a kid - I think she was twelve - and her friends were all around that age and mean to each other, which is believable, but I didn't especially like any of them. In the present day story I initially liked Sam but he began being kind of a jerk. I can see why he would start pulling away from Phoebe with everything that was going on, but I didn't think that shift was developed very well. As the story progressed, it got outlandish in parts. It was totally unrealistic in ways that had nothing to do with the supernatural.

I didn't like Phoebe at all. She is a thirty-five year old woman who makes fun of her boyfriend for being vegetarian and eating organic food. She ridicules his mother's cooking as being bland because it's vegetarian. (Should I even have to point out that flavor is dependent on seasonings and flavorings rather than the presence of absence of meat? No, I should not.) Her preferred meals - and this is a woman who thinks she might be pregnant - are things like Kraft dinner and Hamburger Helper. She was also very resentful of Sam's college education. I think all this was the author's way of trying to make her seem really uneducated because she didn't go to college and I was uncomfortable with that aspect of her character. Not having gone to college doesn't make a person stupid, irresponsible, or resentful of other people's education. Some people are all of those things, but I don't see why Phoebe would be. Her character just didn't come together very well for me.

The narration was ok, but a lot of the voices were exaggerated and sounded like caricatures which made it difficult to take some of the characters seriously. Sam's cousin Evie's voice wasn't portrayed consistently.

The best part of the this book is the cover. Isn't it creepy? It really wasn't a bad premise and at times it seemed like it was going in an appealing direction, but then it would twist another way. In the end, it was exactly as wrong for me as I thought it might be when I started. I should have stopped early on, but kept up a vain hope that I'd start to like it. It's been really well reviewed elsewhere so if it interests you at all I suggest reading some of those other reviews, like the one at Forever Young Adult.
Posted by 3goodrats at 2:25 PM