One Last Thing Before I Go

One Last Thing Before I Go by Jonathan Tropper (2012), narrated by John Shea 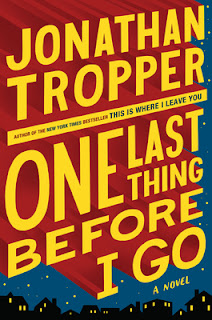 Silver has made a lot of mistakes in his life. A one-time rock star, he now lives in an apartment complex called the Versailles which hosts a wide array of middle-aged unattached men whose poor choices have led them here. His ex-wife, who he's never quite gotten over, is about to marry a guy who Silver likes. His eighteen-year-old daughter seems to feel only disdain for him. He's tempted to feel touched when she confides her pregnancy to him, until he realizes she chose him because she doesn't care much about his opinion. When Silver is suddenly struck down by a serious medical condition and learns that he may die, it's a catalyst to an effort to become a better person, even if that person will only be around for a short time.

I almost stopped about a half hour in because I really don't like stories about neurotic middle-aged men whose lives are a mess and who sit around leering at college girls. But I gave it a little longer and soon was quite drawn into the story.

Silver was troubled, it's true. He was in a rut, having not recovered from the end of his marriage or his career. But you get the feeling that he can do better, that there's hope for him. That may have been enough to save the story for me, but what really clinched it was the appearance of his pregnant 18-year-old daughter. Young and full of promise, having only made one real mistake so far, she was a perfect counterpoint to Silver and it was this relationship that propelled the story and made it so compelling.

I listened to this audiobook in two sittings on a long drive and it really made the trip go by faster and more pleasantly. John Shea's narration is wholly appropriate for Silver's character. His voice is a bit gravelly and took some getting used to, but he really made Silver come alive. Occasionally he sounded a bit like Casey Kasem, which is either good or bad depending on how nostalgic you feel for the glory days of American Top 40. He wasn't bad at female voices (which can be tricky for male narrators) and excelled at others such as Silver's father, an energetic rabbi who wasn't about to sit around and watch his son let himself die.

If you like male-centered domestic fiction or stories about dysfunctional families, I recommend giving this a try.
Posted by 3goodrats at 10:18 PM